Getty Tyler Lockett is going to be a Seahawk for a long time.

Tyler Lockett was initially feared to be in a “serious situation,” but the Seahawks receiver is now out of the hospital. Lockett is back in Seattle thanks to Seahawks owner Jody Allen providing her plane for the receiver to fly back.

“After spending the past two days at a Bay Area hospital, Seahawks WR Tyler Lockett is flying back to Seattle today, per source. Seahawks owner, Jody Allen, provided her plane to fly back Lockett. Expectation is, despite his leg contusion, Lockett will be ready to play vs. Philly,” ESPN’s Adam Schefter tweeted.

It is a remarkable turnaround as Lockett is now expected not to miss any games as the receiver will have the bye week to continue his recovery. Seahawks head coach Pete Carroll discussed his injury status prior to his release from the hospital.

“He’ll be there again tonight just for precautionary reasons,” Carroll said, per ESPN. “He’s better than he was yesterday, and our people think he’s going to be fine to play. He’ll need the rest of this week to make sure that everything goes away, but he should be fine to play next week.”

Lockett Is Dealing With a Bruised Shin

The team exercised caution with Lockett and the receiver did not fly back with the team after their Monday Night Football matchup with the Niners. The main concern was the swelling in Lockett’s leg, but the receiver appears to have recovered from the health scare.

“He just had a big bruise on his shin and the swelling issue is what was of concern,” Carroll told 710 Seattle. “It should be OK. It shouldn’t be a big problem going forward, and it’s great we have the (bye) week. There’s concern when that happens that you can have complications and stuff like that.”

Lockett has emerged as the Seahawks top receiver this season, and Russell Wilson’s favorite weapon. The Seahawks have a bye in Week 11 then will travel to Philadelphia to take on the Eagles in Week 12.

During Carroll’s initial post-game press conference, the Seahawks coach referenced concern for a “compartment element” to Lockett’s injury. Carroll was likely referring to compartment syndrome which can be a serious health concern.

“He’s out of here right now to get looked at,” Carroll said in his post-game press conference, per Pro Football Talk. “It will be OK but it’s a pretty severe situation for right now. I think there was a lot of swelling. The contusion caused a lot of swelling right away and they’ve got stuff… there [are] concerns about that so they’ve got to make sure… There’s a compartment element in this so they’ve got to make sure and just got to take care of him. And we’re ahead of it so we should be in good shape.”

The good news puts Lockett back in the mix as being a WR1 in fantasy football. Lockett has scored the fifth-most fantasy points in PPR leagues and is a must-start each week. Heading into the Seahawks’ bye week, Lockett has 62 receptions for 793 yards and six touchdowns. 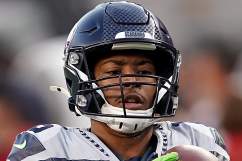