Getty DETROIT, MI - NOVEMBER 28: Allen Robinson #12 of the Chicago Bears scores on a short pass during the first quarter of the game against the Detroit Lions at Ford Field on November 28, 2019 in Detroit, Michigan. Is Robinson a good fantasy start this week, or should you sit him vs the Dallas Cowboys? (Photo by Leon Halip/Getty Images)

Anyone who has viewed multiple Chicago Bears games this season knows that wide receiver Allen Robinson has been the team’s best and most reliable offensive weapon.

Robinson has been the most trusted target for quarterback Mitchell Trubisky, netting a 25% target share of all passes thrown on the season. The 6-6 Bears’ Thursday night matchup against the Dallas Cowboys (also 6-6) will provide a unique stage for Robinson: in a game both teams need to keep their seasons alive, he will be his quarterback’s likely favored target. Will he thrive in the spotlight, or will the Cowboys keep him in check? Here’s a preview of the game followed by our start/sit advice.

The Cowboys have a top 10 defense, and a solid secondary that has surrendered just eight touchdowns through the air this season. Dallas is allowing 19.7 points and just over 215 yards passing per game, and they will be one of the better secondaries Robinson has seen all season.

The Bears, on the other hand, have been in the bottom five teams of the league in terms of offensive production all year. They’re averaging only 17.7 points per game, and they are gaining just over 204 yards through the air per contest. Robinson has 71 catches, 850 yards receiving and five touchdowns on the season, and has been clutch minus a few drops.

Much will come down to the way Bears’ quarterback Mitchell Trubisky performs. Trubisky has played better over the last few weeks, but he hasn’t seen a defense the caliber of the Cowboys during that time, either. Still, he should be relying on Robinson frequently Week 14, much like he has all season.

Should You Start or Sit Allen Robinson Week 14? 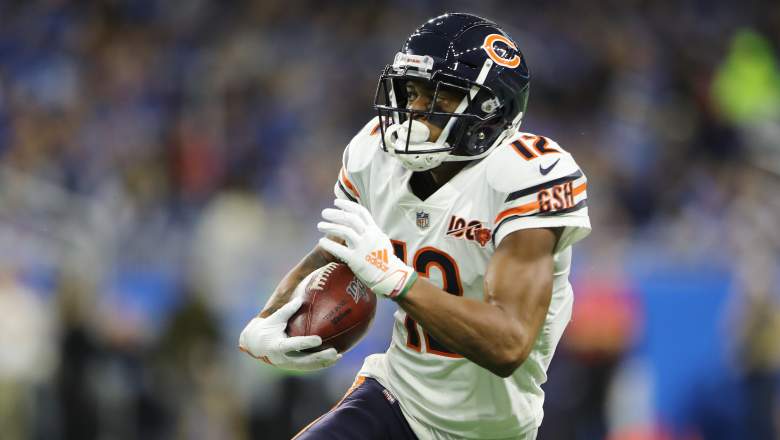 GettyBears wide receiver Allen Robinson has been excellent this season. Should you start or sit him on your fantasy football team this week?(Photo by Rey Del Rio/Getty Images)

In his last game against the lowly Detroit Lions, Robinson was targeted 12 times, catching eight passes for 85 yards and a touchdown. It was the second game in a row in which Robinson has scored, and he’s on a bit of a hot streak of late after stumbling against the Rams and the Eagles.

If you have him on your PPR league team, Robinson is also being targeted too much to ignore. He has 65 targets since Week 6, which is the fourth-most amongst all wideouts in the league. That should not change against the Cowboys.

Final Verdict: START him. The Bears have been awful on offense, but they’ll be playing for their season Thursday night. When it mattered most in the playoffs against the Eagles last year, Robinson came through with over 140 receiving yards and a score. He should have a big game again Thursday, and is a solid WR2 option.

READ NEXT: David Montgomery Fantasy: Should You Start or Sit Bears RB Week 14 vs Cowboys?