Joe Burrow is the favorite to be the No. 1 pick in the 2020 NFL draft. The Bengals have locked up the top selection and have had quarterback issues throughout the season. Andy Dalton has been the longtime Bengals quarterback, but the team benched him earlier this season. Dalton would finish the season as the team’s starter, but it looks like both parties are prepared to move on next season.

Burrow started the season as a likely Day 3 pick but moved into the first-round conversation by mid-season thanks to LSU’s revamped offense. Burrow has played himself into likely being the No. 1 pick in April’s draft.

Burrow threw for 4,715 passing yards, 48 touchdowns and six interceptions while completing nearly 78 percent of his passes during the regular season. The LSU quarterback also rushed for 289 yards and three touchdowns.

While Burrow is the favorite to be the No. 1 pick, the Bengals will also be considering other top prospects including Ohio State pass rusher Chase Young. ESPN’s Todd McShay has Burrow as the No. 1 selection in his latest NFL mock draft.

Accuracy, toughness and pocket awareness — the total package. That’s what the Bengals would get with Burrow in their first No. 1 overall pick since Carson Palmer in 2003. Andy Dalton isn’t owed any guaranteed money in 2020 and could be released, and Ryan Finley didn’t look like the long-term answer in his terrible three-game stint as starter. It’s time to get Zac Taylor a quarterback to build around.

The Athletic’s Dane Brugler also has Burrow going to the Bengals in his recent mock draft.

Burrow will be dinged throughout the process for having an average arm, but what he does really well is why the Bengals should make him the face of the franchise. His poise in the pocket, downfield accuracy and competitive toughness are all outstanding and why the Ohio native should soon return home.

Burrow put up outrageous numbers this season in Baton Rouge. The only knock on Burrow’s resume is the small sample size of stellar play. Burrow has one great season of college football. Burrow started his career at Ohio State where he played sparingly before transferring to LSU.

Burrow threw for 2,894 yards, 16 touchdowns and five interceptions while completing just 57.8 percent of his passes in 2018. Burrow does not have multiple great seasons like Alabama’s Tua Tagovailoa. We have seen players like Mitch Trubisky still go high in the draft despite only having one solid season during their college careers.

Bleacher Report’s Matt Miller has Burrow as the No. 2 overall prospect on his big board. Miller still has Burrow going to the Bengals with the No. 1 pick.

Even with a rare pass-rusher available in Ohio State’s Chase Young, the Bengals have to select the quarterback. It doesn’t hurt that Burrow is from nearby Athens, Ohio. 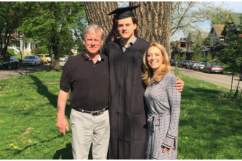