Lamar Jackson has been dating girlfriend Jaime Taylor for a little more than two years, per BaltimoreRavens.com. Taylor appears to be a big Harry Potter fan and came up with the idea for the Ravens quarterback’s Halloween costume. Jackson dressed as Harry Potter for Halloween, but he admitted he has trouble staying awake during the movies.

“Harry Potter. I was Harry,” Jackson explained to reporters when asked about his costume. “I thought it was pretty cool. My girl she wanted [to do a Harry Potter theme]. Had the little coat on, I felt like I was back at the wizard’s place. It was pretty dope…I wouldn’t say I am [a fan of Harry Potter]. I watched a few movies but it’s pretty long. I get sleepy. I’ll be watching it for like a good hour then [I fall asleep]. Then Harry Potter start watching me.”

Here is a look at Jackson’s epic Harry Potter costume.

We Ain’t really wit that talkin, We love that action, they not bout that life catch them in traffic?

During a recent interview with BaltimoreRavens.com, Taylor admitted she gets frustrated when Jackson is criticized. The Ravens quarterback has helped her block out the outside noise.

“He’s taught me how to handle criticism,” Taylor noted to BaltimoreRavens.com. “I mean, I used to get mad when I’d read stuff. Then I’d look at him, and he’s just fine. He says, ‘Let them do the talking. You don’t have to say anything. Just show them.’”

Jackson has emerged as the front-runner for the NFL MVP, but Taylor prefers to stay out of the spotlight. Jackson’s Instagram page focuses on football as the Ravens quarterback does not post pictures of the couple.

Jackson Has a Close Relationship With His Mom, Felicia Jones

In addition to Taylor, Jackson is extremely close to his mother Felicia Jones. Jackson was raised by his mom after his father passed away at a young age. Rather than signing with an agent, Jackson appointed his mom as his manager during the pre-draft process. During an article written for The Players’ Tribune, Jackson discussed how his mother used to coach him and his brothers when they were growing up.

“A lot of people helped me get better when I was young, but the best coach I’ve ever had was also my first one: Mom,” Jackson noted for The Players’ Tribune. “And I’m not saying that just because she looked out for me and encouraged me to pursue football and all that stuff. I mean she actually made me grind to get better…After we ran, we’d go into our backyard, put on equipment and start hitting — me, my younger brother and my mom. Now she was never like trying to put a lick on us or anything, but we’d all run through drills together. We bonded that way.”

It was also Jones that fought hard for Jackson to play quarterback. Not only growing up but as Jackson fought for draft positioning as he headed to the NFL. All of which has paid off for Jackson and his family. 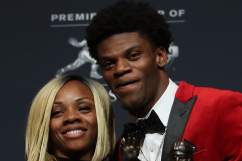