Getty Tom Brady is the most hated player in the NFL, says a new study.

It would appear that Tom Brady of the New England Patriots is the most hated player in the NFL — by far.

According to a study based upon Twitter data from Sportsbetting.ag, Brady is the most hated player in 31 of the 50 states. The site used geotagged Twitter data – over 50,000 tweets – gathered in the last month to find its results.

The map is based on a study asking fans to name players that they like, dislike and hate.

The full breakdown is as follows, with Lamar Jackson coming in second with five states voting him as the most hated. What’s interesting to see here is that in Massachusetts and a couple of neighboring states, Eli Manning is the most hated player — probably due to the fact that he led the New York Giants to a couple of Super Bowl wins over the Patriots. 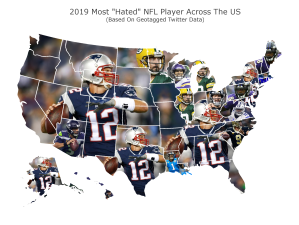 Based upon looking at the map, Brady is hated all throughout the West Coast, the South and the Southeastern region of the United States. He’s also hated in New York — considering the Patriots’ AFC East rival, the New York Jets, play in that division and also considering the Giants were the Pats’ top NFC rival a decade prior.

As far as Brady being hated in California is concerned, that one is a little bit surprising. Brady originally hails from San Mateo, California. One would think that the veteran quarterback’s hometown state would show some appreciation for their hometown kid, but that obviously isn’t the case.

Los Angeles Chargers and Oakland Raiders fans obviously hate Brady due to the number of times he has defeated their teams in the playoffs, including the infamous 2002 Divisional Round “Tuck Rule” game which led to the Patriots’ first Super Bowl title.

As far as Texas is concerned, that one is understandable considering Brady has never lost to the Dallas Cowboys in his 20-year career. The Patriots have arguably also taken the “America’s Team” tag away from the Cowboys in the 21st century, having won six Super Bowl titles since 2001.

As far as the Southeastern region is concerned, that’s obvious for one simple reason — the Miami Dolphins. Although the Dolphins have won just one division title since Brady became a starting quarterback in 2001, they have frequently been a thorn in New England’s side. Brady is 8-10 in Miami during his career — by contrast, he has a .776 winning percentage for his career.

While Brady may be the greatest quarterback and arguably even greatest player of all time, it’s clear that based upon this study, his greatness hasn’t made fans like him very much.

Although Brady wasn’t listed on the injury report leading into the Patriots’ Week 16 matchup versus the Buffalo Bills, there is still speculation that his elbow injury could be worse than expected.

A lot of the speculation is due to the fact that Brady has been dealing with an elbow ailment all season long, but it’s also been due to his decline in play. According to NFL Media Research, Brady’s production has nose-dived in the second half of the season. Since Week 9, his completion percentage (54.1), yards per attempt (5.4) and passer rating (75.7) all rank dead last among quarterbacks who’ve made at least five starts in that span.

Brady’s elbow injury is obviously a cause for concern, but as long as New England can continue winning games, it won’t be much of a topic moving forward.