Getty Utahs Zack Moss is one of the best running backs in college football.

Senior Bowl’s Jim Nagy called Moss the best senior running back in the country heading into the season. Moss is one of several Utah players that will be playing in the Senior Bowl.

The Athletic’s Dane Brugler has Moss as his No. 42 ranked prospect which would put him getting drafted in the second round. Moss is the fourth running back selected in Brugler’s NFL mock draft.

I don’t type the word “elite” very often because it should be reserved for special use. But Moss is going to make me use it because he has elite contact balance. He has the lateral quickness to avoid defenders, but when he attacks contact, Moss has the unique ability to keep his feet. The medicals are key here, but his talent is top-50 worthy.

Bleacher Report’s Matt Miller has Moss being selected in the third round with the No. 83 pick by the Titans. Miller noted on Twitter that he loved Moss’ “running style.”

STRENGTHS: Moss rushed for 1,246 yards and 15 touchdowns heading into the Pac-12 title game. The Utah running back also has 22 receptions for 317 yards and a touchdown. Moss is a physical running back who rarely goes down with the first tackle and his running style can wear down opposing defenses by the second half.

Pro Football Focus has Moss as their highest-rated running back in college football. Moss has a strong body of work and has rushed for three straight seasons for more than 1,000 yards and double-digit touchdowns.

WEAKNESSES: The biggest red flag for Moss has nothing to do with his play on the field. Moss sustained a season-ending knee injury during practice last November and battled through a shoulder injury in 2019. The Utah running back showed no ill-effects in 2019 from last season’s knee injury and has played the majority of this season despite the issue with his shoulder.

There are times when Moss seeks out contact, potentially at the expense of his own durability. Moss’ physicality is part of what separates him as a runner, but NFL teams will also want him to be smart about the punishment he takes at the next level. Moss has proven he can catch passes but it is still an area where he can get more usage.

SUMMARY: Moss’ ceiling appears to be the second round while the majority of draft projections have him going in the third round. It will be interesting to see how Moss performs at the Senior Bowl and NFL Combine as he looks to rise above some of the other top backs like Travis Etienne, J.K. Dobbins and Jonathan Taylor. Moss’ physical running style gives energy to the entire team, but there are questions about how much of a toll this has taken on his body. 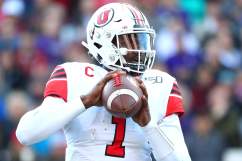