Chicago Bears superstar linebacker Khalil Mack made his fifth Pro Bowl this season. Mack finished the year with 8.5 sacks in a year that was an all-around disappointment for the team. Three Bears players will head to Orlando to play in the game, but as it turns out, Mack will not be one of them.

The Bears announced via their website Tuesday afternoon that while safety Eddie Jackson, cornerback Kyle Fuller and kickoff return specialist Cordarrelle Patterson will attend, Mack will not, and the team was (once again) more than a little vague when disclosing his reason for not attending.

Mack, who missed the Pro Bowl last year, will miss the game again this year for the same reason: an “undisclosed injury,” per Larry Meyer. Mack was selected to his fourth Pro Bowl last year in his first season with the Bears, and he ended up resting instead of playing, and it looks like that’s the plan again this season. But why the secrecy regarding his injury?

Mack Did Not Want to Discuss Pro Bowl in December, Dealing With Neck and Back Issues 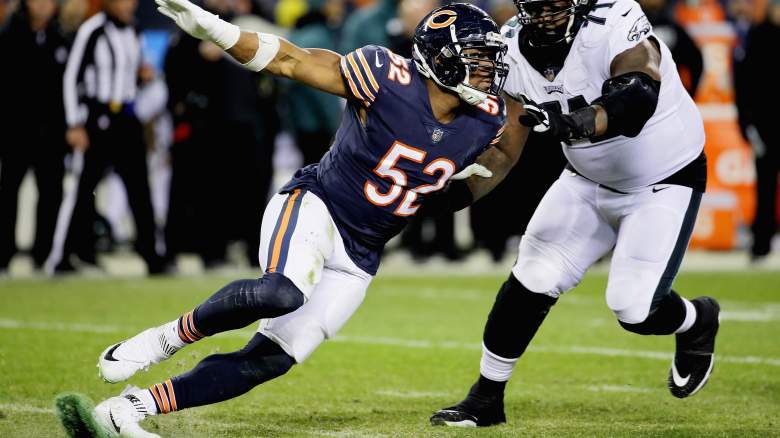 GettyChicago Bears Linebacker Khalil Mack has made two Pro Bowls in two seasons with the Bears, but he has yet to play in one. (Photo by Jonathan Daniel/Getty Images)

After the top vote-getters for the 2020 Pro Bowl were announced, Mack was asked about being selected despite what many thought was a down season for him. He responded to any and all questions about the Pro Bowl by saying “next question,” an answer he gave three-straight times when he was asked if he planned on playing in the game, making it abundantly clear the year-end game in Orlando was of very little interest to him.

Thus, Mack missing the Pro Bowl was somewhat expected, but it is worth monitoring the undisclosed injuries the team referenced on its website. Jeff Hughes of Da Bears Blog reported that Mack had been dealing with “neck and back issues all season” according to “things I’ve heard” from his sources. Mack will be 29 years old next season in his third year with Chicago.

Mack will be replaced in the Pro Bowl by Packers’ outside linebacker Za’Darius Smith, who had a career year, with 13.5 sacks. It will be the first Pro Bowl of Smith’s career.

The Pro Bowl will take place this Sunday, January 26 at 3:00 p.m. ET from Camping World Stadium in Orlando, Florida.

READ NEXT: Colts TE Eric Ebron Hints He Wants to Be a Chicago Bear Next Season