Well, that was a fast flip of the script for former Baylor Bears head football coach Matt Rhule. On the day he was scheduled to be interviewed by the New York Giants, Rhule instead will become the next head coach of the Carolina Panthers.

Sources: Baylor coach Matt Rhule finalizing a deal to become next coach of the Carolina Panthers.

Former Baylor HC Matt Rhule is taking the Carolina Panthers’ HC job, as @PeteThamel reported. Rhule was supposed to interview today with the Giants; he didn’t make it there.

Rhule was reportedly being heavily favored to take over in New York as the next Giants head coach, but that did not happen. The Panthers wanted Rhule as their next head coach, and in order to make that a certainty, they offered Rhule a deal before he could leave town, according to Ian Rapoport.

Rhule was expected to have an interview with the Giants on Tuesday, but when news broke that same morning that he had been hired in Carolina, the Giants changed their afternoon plans.

The #Panthers are hiring #Baylor coach Matt Rhule, source says (as @PeteThamel reported). They are working out the deal as we speak. They did not want him to get on the plane to the #Giants.

The #Panthers had a top two of Josh McDaniels and Matt Rhule. Owner David Tepper spent yesterday in Waco with Rhule and his family, and he heard enough. Rather than risk Rhule getting on the plane, he made a deal. Rhule is now Carolina’s coach.

The Panthers had also been interested in Patriots offensive coordinator Josh McDaniels, but after spending time with Rhule and his family in Waco over the weekend, the team appears to have decided Rhule was their guy. 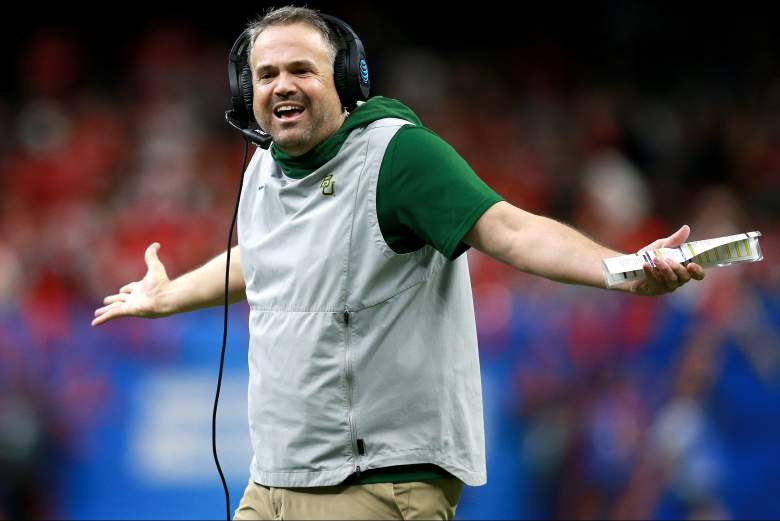 GettyHead coach Matt Rhule has left the Baylor Bears and will be the new head coach of the Carolina Panthers, replacing Ron Rivera

According to NFL analyst Benjamin Allbright, the Panthers “gave Rhule everything he wanted” and did all they could to secure his services as head coach. Allbright also said that his sources told him that the New York Giants were “stunned” when they heard the news.

Panthers gave Rhule everything he wanted, wouldn't let him leave.

Still, the Giants couldn’t have been too stunned, considering they turned around and immediately hired Patriots special teams and wide receivers coach Joe Judge to be their new head coach.

Rapoport said on the NFL Network Tuesday morning that the move to sign Rhule was a “stealth move … a ninja move,” as few saw it coming, and it happened very expediently. Rapoport also said that Panthers general manager David Tepper was willing to go all in on Rhule and give him everything he has access to at Baylor, while also being willing to “put the money in Sports Science-wise,” in order to let Rhule build the program he wants to build with Carolina.

From @gmfb: The #Panthers swooped in and hired #Baylor coach Matt Rhule in a stealth move. One big draw was #Panthers owner David Tepper being willing to put money into the sports science program that Rhule wants. Resources won’t be a problem. pic.twitter.com/CIB52vDldE

The details of Rhule’s contract were released a bit later by Adam Schefter. The Panthers signed Rhule to a seven-year deal worth $60 million.

Panthers are giving former Baylor HC Matt Rhule a seven-year – seven year – deal worth $60 million that with incentives could be worth up to $70 million, per league sources.

Rhule’s deal also has incentives that could make it worth up to $70 million if he performs well.

READ NEXT: Bears GM’s Comments About Drafting QB’s Are an Obvious Smokescreen