Getty Tight end Eric Ebron #85 of the Indianapolis Colts may have just hinted that he wants to be a Chicago Bear. (Photo by Michael Hickey/Getty Images)

When Indianapolis Colts general manager Chris Ballard said after the team’s season ended that the Colts would “probably move on” from tight end Eric Ebron, it became quite clear the tight end would be looking to sign with a new team this offseason.

Sunday night, during the NFC Championship, Ebron retweeted a few Chicago Bears players, and the tweets he selected suggested he may be making a statement about which uniform he’d like to don in 2020. 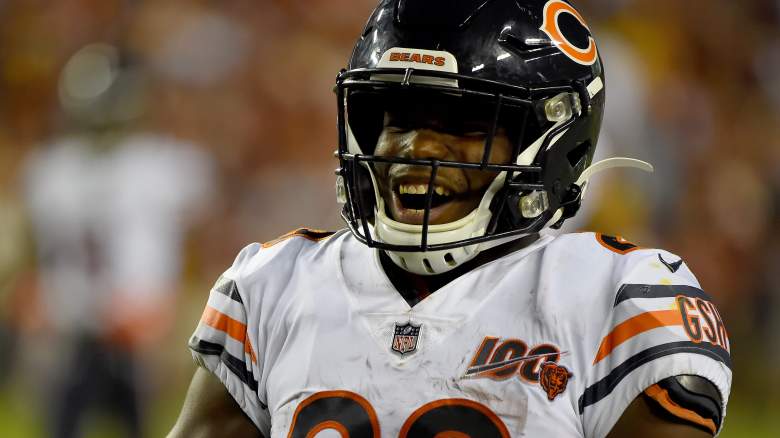 GettyTarik Cohen of the Chicago Bears just told Colts tight end Eric Ebron to come play for the Bears next season. (Photo by Will Newton/Getty Images)

First, Ebron retweeted a video shared by Bears defensive lineman Akiem Hicks. In the video shared by Hicks, he shares a video of the crowd at Levi Stadium and asks fans: “How lit would this be at Soldier Field?”

Ebron then retweeted the video with the thinking face emoji:

Ebron wasn’t done there, however. Bears running back Tarik Cohen responded to Ebron’s retweet, and invited the tight end to come to Chicago, saying: “Cmon man,” in reponse. Ebron then retweeted Cohen, while also ‘liking’ his tweet.

The Bears had one of the worst offenses in the NFL this season, and lack of production at the tight end position is a huge reason why. The Bears had only 46 receptions by their tight ends all of last season, which is unacceptable considering they’re going to be shelling out $13.4 million of their salary cap to the position next season. Adding Ebron would give them an upgrade, and some security should their current TE1 Trey Burton get bitten by the injury bug again next season.

Ebron is set to be a free agent in 2020. He made just under $7 million this season with the Colts, per Spotrac, and if he kept his price tag reasonable, he could see himself in blue and orange before too long.