After another monster performance against his former team, there’s little doubt that the mighty haul that the Los Angeles Lakers gave up for Anthony Davis was worth it.

The Lakers cruised to their fourth consecutive win against the New Orleans Pelicans on Friday night, utilizing an efficient 46 points, 13 rebounds and three blocks from Davis in the 123-113 win.

It was the second 40-plus-point game Davis has had this season against the Pelicans in as many tries — but was much more effective this time around. He was 15-of-30 at Smoothie King Center earlier this season, finishing minus-six.

“It was an emotional game for me [in November]. I just wanted to play as good as possible,” Davis told reporters after the game. “Tonight, I didn’t have that many emotions because I got that out of the way the first game. It was just another game. We just come out and play and did whatever I can to get the win.

“Even though we won the game [in New Orleans], I didn’t like playing that way where they were just forcing the ball. I knew the situation, obviously, and my teammates wanted me to play well against my former team the first time.”

.@AntDavis23 talks with @LakersReporter about facing his former team for the second time this season and chemistry with LeBron continuing to grow. #Lakers pic.twitter.com/oUe7kxsdbK

Davis and LeBron James have proved to be a perfect pairing, guiding the Lakers to a 28-7 record — the best in the Western Conference. But believe it or not, there were critics that thought the Lakers gave up too much when the blockbuster trade went through to bring Davis to Los Angeles.

The Lakers sent Lonzo Ball, Brandon Ingram, Josh Hart and three first-round picks to New Orleans in the deal. It was quite the price of young talent, but it’s safe to Davis was worth the king’s ransom.

James took to Instagram after his co-star’s massive performance to gloat about the move that transformed the Lakers into the NBA title favorite. 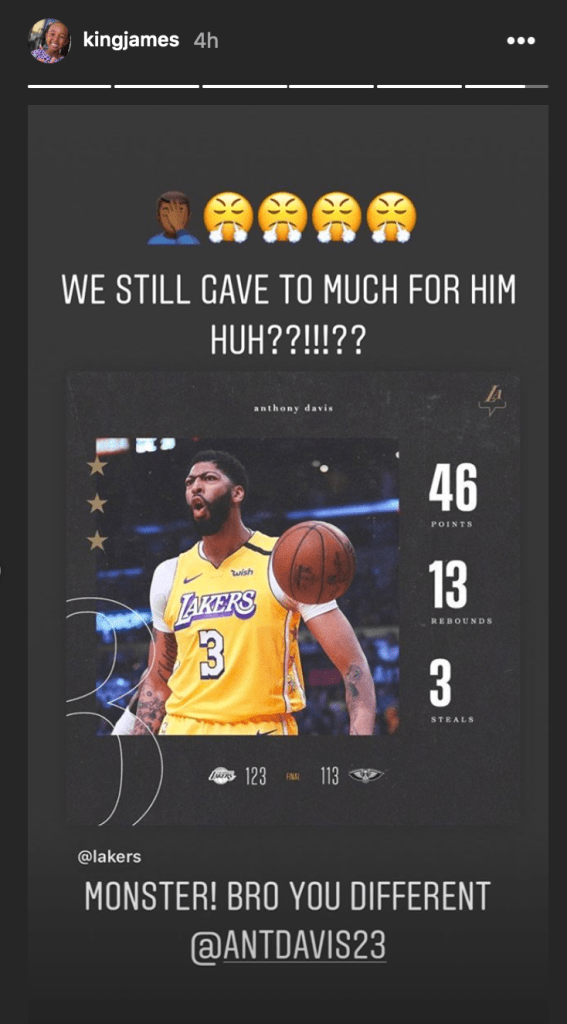 James was open about his happiness of seeing Davis thrive in a Lakers uniform after the win against the Pelicans.

The game marked the first return of Ball, Ingram and Hart to Staples Center and the lakers played a highlight video in advance of the game.

Ball scored 23 points and Ingram went for 22 points for the Pelicans. Hart had five points off the bench.

“I enjoyed my time here,” Ball told reporters, via ESPN’s Ohm Youngmisuk. “It’s my hometown, so I love playing in front of them. Unfortunately, I was hurt both years [as a Laker], which was terrible for me and I know for the fans. But I wish them the best going forward.”

The Pelicans fell to 11-24 with the loss and have the second-worst record in the Western Conference.

Read More
Basketball, Los Angeles Lakers, NBA
Anthony Davis led the Lakers to a victory against his former team on Friday night, again validating the blockbuster offseason trade that brought him to LA.