Newly minted NFL analyst and future Hall of Fame tight end Rob Gronkowski has officially weighed in on the Travis Kelce vs George Kittle debate. Kelce, who has been one of the game’s top tight ends since he entered the league in 2013, has been a core part of the Kansas City Chiefs‘ powerhouse offense.  The same can be said for the 49ers‘ Kittle, who entered the league in 2017.

This season, Kelce caught 97 passes for 1,229 and five touchdowns in 16 games. Kittle caught 85 passes for 1,053 yards and five scores in 14 games, missing two weeks while dealing with knee and ankle injuries. Gronk, who helped the New England Patriots win the Super Bowl last season, will now serve as an analyst for the game for FOX. When he was asked this week which tight end he thought was the better one, he didn’t hesitate in his response.

Gronk on Kittle and Kelce: ‘I See a Bit of Me in Both’ 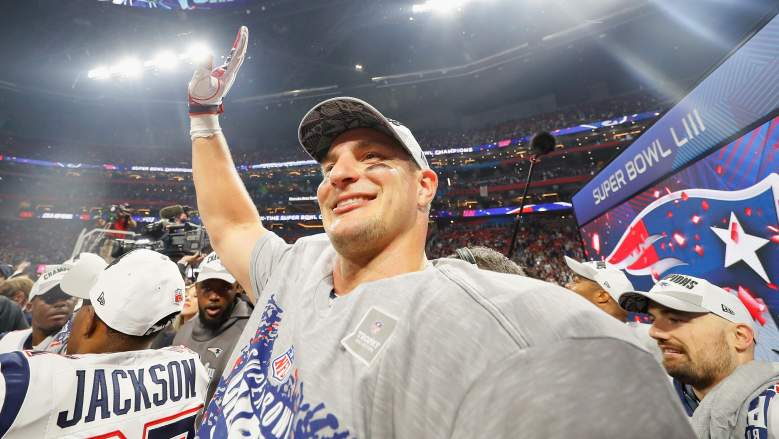 Gronk sat down this week to discuss the upcoming Super Bowl LIV matchup, and he was asked which tight end he’d pick over the other. “Kittle, for sure, “Gronkowski told The Athletic’s Daniel Brown. “He just reminds me of myself a little bit with the way he plays the game.”

Gronk acknowledged Kelce’s greatness, but thinks Kittle’s game is more like his own used to be. “I see a little bit of me in both, but I would say I’m definitely more of a Kittle, hands down,” Gronkowski said. “I would say that because of the attitude that he brings to the table, just the grit he brings into the trenches. He wants to bring it every time. He wants to be that guy that’s fierce out there and just wrecking guys whether it’s the passing game or the running game.”

Gronk then referenced Kittle’s key fourth down play against the Saints in the fourth quarter this year. “He has that personality and the way his work ethic is, and he reminds me of myself and the way he doesn’t want to go down,” Gronk said. “You could tell from the fourth-and-2 when he played the Saints, you could tell he didn’t want to go down, he wanted to score … that reminds me of myself. Every time you get the ball, just have everyone on the defense try to take you down.”

Neither tight end has a Super Bowl, however, and that is going to change Sunday.

READ NEXT: Super Bowl LIV Uniforms: What Jerseys Will the 49ers and Chiefs Wear?