The 2020 NFL Scouting Combine is in full swing, and the Chicago Bears have already begun the process of talking to potential future players.

Some decisions made by the team so far — their meeting tight end, Brycen Hopkins, for example — seem spot on. Tight end is a major need for the Bears offense. But other decisions — like the team’s not interviewing Washington State quarterback Anthony Gordon — are a bit surprising.

TE Brycen Hopkins says he’s met with the #Bears here at the Scouting Combine. Said in total he’s met with 29 other teams. #ScoutingCombine

Washington State QB Anthony Gordon says he has not met with the #Bears yet at the combine.

The Bears have, however, met with one quarterback who has plenty of big game experience.

Bears Met With Georgia QB Jake Fromm at the 2020 Combine

In addition to a “handful” of wide receivers and a few tight ends, the Bears spoke to Georgia’s Jake Fromm, who started at quarterback for the Bulldogs for the last three seasons.

Ryan Pace says the #Bears talked to a “handful” of WRs last night at the Combine.

Jake Fromm said he did meet with the #Bears. pic.twitter.com/Z2aAEsExuA

Fromm has been linked to the Bears for months, in large part because GM Ryan Pace seems to have a fondness for drafting players out of Georgia. There are four former Georgia Bulldogs currently on the Bears roster, all drafted by Pace: linebackers Leonard Floyd and Roquan Smith, and wide receivers Javon Wims and Riley Ridley. Fromm threw to both Wims and Ridley in college. Could he be the next Bulldog-turned-Chicago Bear? 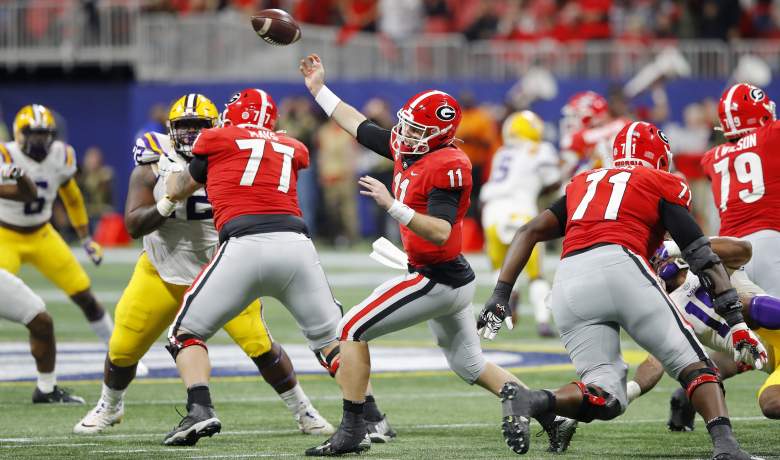 NBC Sports’ Bryan Perez noted recently that in a recent pre-combine evaluation of young talent about to enter the NFL, Jake “Fromm’s strengths are Trubisky’s weaknesses right now.” Perez went on to cite Fromm’s accuracy, as well as his ability to read defenses — both of which Trubisky struggled with all throughout the 2019 season — as strengths the Georgia quarterback brings to the table.

Fromm may also be one of the more attainable quarterbacks for the Bears to go after in this draft. The team has no picks in the first round, and they don’t have the draft capital to trade up without selling their entire future, so it’s very likely the Bears could take a quarterback with one of their two second-round picks. It’s also very likely Fromm will be selected in the second round, so if the Bears want to add him, that’s when they’ll have to do it.

Perez also suggested that with his accuracy and smart play, Fromm could be a younger, more inexperienced Alex Smith-type — which could appeal to Bears head coach Matt Nagy, who worked with Smith so well in Kansas City.

READ NEXT: Bears Coach Matt Nagy is About to Test Mitch Trubisky in a Major Way