Getty CHICAGO, ILLINOIS - FEBRUARY 16: Giannis Antetokounmpo #24 of Team Giannis dunks the ball in the second quarter against Team LeBron during the 69th NBA All-Star Game at the United Center on February 16, 2020 in Chicago, Illinois. NOTE TO USER: User expressly acknowledges and agrees that, by downloading and or using this photograph, User is consenting to the terms and conditions of the Getty Images License Agreement. (Photo by Jonathan Daniel/Getty Images)

In a video shared on Twitter courtesy of USA Today Sports, Antetokounmpo was asked about whether or not he would like to play alongside both of his brothers. Thanasis, his older brother, currently plays with Giannis in Milwaukee, but their younger brother, Kostas, is a member of the Lakers.

“You have one brother with you in Milwaukee, another one in L.A., he was asked. “Have you ever thought about what it’d be like having everyone together?” The “Greek Freak’s” response was quite revealing.

Giannis on Playing With His Brothers in the Same City: ‘That Would Be Amazing’ 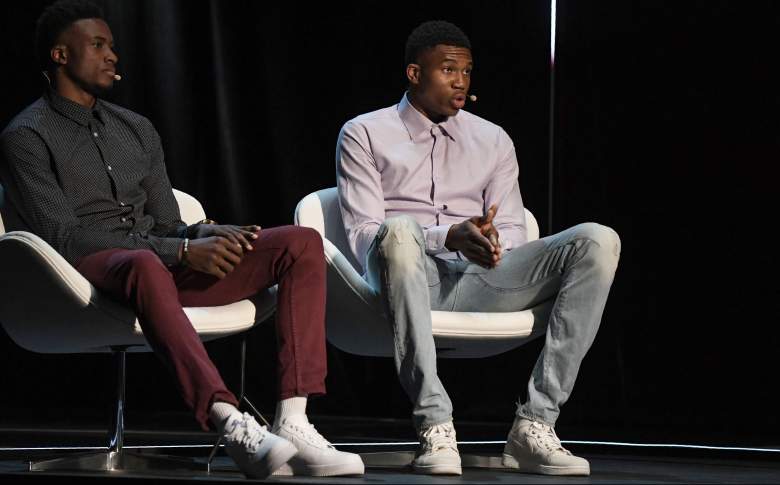 “I think that would be amazing,” Giannis said of playing on the same team as his brothers. “Obviously, we’d spend more time together, and I’m 100 percent sure my mom would love that,” he said jokingly, before adding: “But if we could, like, team up on a team, Milwaukee, LA, whatever, that would be awesome.”

Surely Bucks fans won't overreact to these comments from the Greek Freak… pic.twitter.com/uTk0PfYFxA

The Bucks superstar’s inclusion of Los Angeles is telling. Antetokounmpo said last fall that if the Bucks did not perform at a very high level this season, his decision to stay or leave would be “a lot more difficult,” and if the culture in Milwaukee sours in any way, he would absolutely consider leaving. He will be an unrestricted free agent in 2021, and when that time comes, he will be the most coveted player available.

“I want the Bucks to build a winning culture,” Antetokounmpo said last fall, per USA Today. “So far, we have been doing great, and, if this lasts, there’s no other place I want to be. But if we’re underperforming in the NBA next year, deciding whether to sign becomes a lot more difficult.”

The Bucks currently have the best record in the NBA, and the Lakers are right behind them. Much could depend on how well Milwaukee performs when the postseason rolls around. Last season, the Bucks fell to Kawhi Leonard and the Toronto Raptors in the Eastern Conference Finals, and Antetokounmpo and company will be thinking championship or bust this year.

If the Lakers manage to win it all, though, they could become an even more attractive destination for Antetokounmpo.

READ NEXT: Murals Honoring Kobe & Gianna Bryant Begin Popping Up All Across the Country: [LOOK]