Getty The Daytona 500 is under a rain delay.

The Daytona 500 has been postponed until Monday, February 17th at 4 p.m. on Fox. The race experienced a lengthy delay as the rain continued to pour onto the track and NASCAR officials ruled that they would be unable to complete the race on Sunday under the lights.

“NEWS: Today’s 62nd running of the #DAYTONA500 has been postponed due to inclement weather. The race will resume on Monday at 4 PM ET on FOX,” NASCAR tweeted.

The race was slated to start on Sunday, February 16th at 2:30 p.m. Eastern but was delayed before the drivers were able to complete 20 laps then NASCAR once again halted the action. Ricky Stenhouse Jr. is the early leader with 180 laps remaining in the race.

NASCAR was initially hoping the rain would stop, allowing the staff to dry the track to run the race on Sunday night. Daytona International Speedway is no stranger to rain delays as the race has a history of running into unfortunate weather. There is a lot at stake in the race as NASCAR announced that the 2020 Daytona 500 has the largest purse in the history of the sport.

“The Daytona 500 is more than just the season-opening race,” Daytona International Speedway President Chip Wile said in a press release. “It’s a life-changing event for the winner, whose name will join the legends of this sport. Fans will pack the state-of-the-art motorsports venue, and millions will watch on television. And the reason is simple: The Daytona 500 is one of the premier events in all of sports, and now has the richest purse in history.”

NASCAR Announced the Daytona 500 Has Been Postponed Until Monday, February 17th

A race under the lights would have altered the plans of teams, but still would have been preferable to having to push the action back a day. Unfortunately, the rain did not let up enough for the staff to be able to begin the process of drying the track.

Meteorologist Kevin Roth correctly predicted that there would be more storms ahead in Daytona which extended the delay.

“?☔️ Smaller cell that crossed over the #DAYTONA500 was a bit of a bad-luck pop-up. Probably have at least an hour of dry weather, but bigger showers farther upstream are a concern. #Daytona #nascarxfox,” Roth noted on Twitter.

The Daytona 500 has a total of 200 laps around the 2.5-mile speedway meaning the race is not even close to being halfway completed. The race was delayed beginning at 4:36 p.m. Eastern after a couple smaller breaks in the action. NASCAR was prepared to dry the track but the rain needed to stop for this work to begin.

A fleet of 18 Air Titans, 12 jet dryers, two vacuums and one sweeper are at the speedway for track-drying efforts.

The Daytona 500 marks the start of the NASCAR season. Stenhouse Jr. admitted that he is hoping to use the race to prove he belongs among the sport’s top drivers.

“I think there’s a handful of us that feel like we have something to prove,” Stenhouse noted, per Fox News. “I feel like I can still get the job done behind the wheel and win races like we did in the Xfinity Series. … That was a huge move for me going over there, bringing people that I’m familiar with that have always been in my corner. I think I’d have been lost not having them there.”

Here is a look at the current Daytona 500 leaderboard. 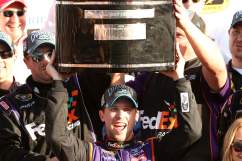