Kobe Bryant’s funeral at Staples Center was filled with a number notable celebrities and athletes including Michael Jordan. After Bryant’s wife Vanessa Bryant delivered a moving speech during the service, it was Jordan who helped her off the stage. Here is a look at the heartwarming moment that has gone viral.

Michael Jordan helping Vanessa Bryant after down the stage after her eulogy for Kobe and Gianna Bryant pic.twitter.com/clXQECgQ5s

It was just a few minutes before Jordan would deliver his own moving speech. Jordan was one of Bryant’s NBA idols as the former Lakers star grew up watching the legendary player. After Bryant’s death, Jordan described himself as being in “shock” and called him his “little brother.”

“I am in shock over the tragic news of Kobe’s and Gianna’s passing,” Jordan noted in a statement. “Words can’t describe the pain I’m feeling. I loved Kobe- he was like a little brother to me. We used to talk often, and I will miss those conversations very much. He was a fierce competitor, one of the greats of the game and a creative force. Kobe was also an amazing dad who loved his family deeply- and took great pride in his daughter’s love for the game of basketball. Yvette joins me in sending my deepest condolences to Vanessa, the Lakers organization and basketball fans around the world.”

While Bryant was still playing in the NBA, the All-Star called Jordan his “big brother” noting he admired his “competitive spirit.”

“We hit it off very well,” Bryant said, per Bleacher Report. “He was really like a big brother, and whether it’s because we see things in a similar way in terms of our competitive spirit or fire or whatever the case may be, there’s an understanding that we have—a connection that we have.”

Kobe Described His Relationship With MJ as “Really, Really Good”

Don't think anyone watching today will ever forget this image of Michael Jeffrey Jordan … talking about his friend Kobe Bean Bryant … pic.twitter.com/gbOHdHu7fn

Jordan discussed his close relationship with Bryant during a heartfelt speech. It was one of the most moving parts of Bryant’s memorial service. Bryant admitted they had a “really, really good relationship.”

Jordan’s speech was one of the most memorable parts of Bryant’s memorial service. The New York Times’ Marc Stein noted that the image of Jordan crying is likely to remain with fans for a long time.

“Don’t think anyone watching today will ever forget this image of Michael Jeffrey Jordan … talking about his friend Kobe Bean Bryant …,” Stein noted on Twitter. 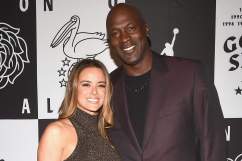