“Congrats to @PatrickMahomes and the @Chiefs. #SuperBowlLIV #LGM,” the Mets noted on Twitter.

“I mean, I was with him,” Pat Sr. explained to the New York Daily News. “I saw him turn down life-changing money and he said ‘Dad, I want to play football.’ He made the decision. He’s always been a kid that was very responsible with the decision that he made. Once he made the decision, I changed my hat and we decided to the best we could.”

Patrick Believes Growing Up in MLB Clubhouses Helped His Career

Patrick may have opted to play a different sport, but that does not mean his experience growing up around pro baseball teams did not help his career. During the NFL Combine, Patrick noted that being around so many great MLB players showed him the “way to be a professional athlete.”

A-Rod on how he once told a young Patrick Mahomes to play baseball instead of football | FOX SPORTSOnce upon a time, Alex Rodriguez was baseball teammates with Pat Mahomes, the father of Kansas City Chiefs star quarterback Patrick Mahomes. He recalls the time when he told a young Mahomes to pursue baseball instead of football. He also makes his pick for the Super Bowl and explains why the Boys & Girls Club…2020-02-01T01:12:05.000Z

One of Pat Sr.’s teammates with the Rangers was Alex Rodriguez. The legendary slugger noted that Pat was one of his favorite teammates.

“If anybody even threw near me, he would go hit someone on the other team,” Alex explained to the Kansas City Star.

Alex admitted he gave his son Patrick a bit of bad advice recommending he play baseball over football. The legendary MLB player is thankful the Chiefs quarterback did not follow his reccomendation.

“Your future is in baseball, that’s what I told him,” Alex noted to the Kansas City Star. “I’m happy he didn’t listen to me then, so I’m not giving him any more advice.”

One of Pat Sr.’s former teammates, LaTroy Hawkins is Patrick’s godfather. The Chiefs quarterback speaks highly of LaTroy and his influence on his life.

“Yeah, LaTroy’s been around forever, I love him,” Patrick noted to 9 News. “Great role model for me to look up to and an awesome pro and an even better person.”

After Alex Smith was traded, LaTroy offered the Chiefs quarterback a bit of advice as the Mahomes era officially began in Kansas City. 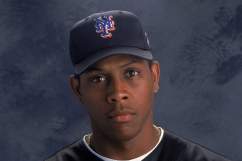