LSU’s standout tight end, Thaddeus Moss, will not take part in any drills in the 2020 NFL Scouting Combine this year. The son of Hall of Fame wide receiver Randy Moss and top tight end prospect will tend to a foot injury instead.

Per NFL Network insiders Tom Pelissero and Ian Rapoport, Moss has a Jones fracture in his right foot that was revealed during his routine physical at the combine. The injury will require surgery, but his recovery time will be minimal enough and should not interfere with the start of the 2020 NFL season.

LSU tight end Thaddeus Moss’ physical at the combine revealed a Jones fracture in his right foot and he will have surgery, sources tell me and @RapSheet. The son of hall of fame WR Randy Moss should be healthy in plenty of time for his rookie year.

.@Rapsheet has the latest on TE prospect Thaddeus Moss' injury ?

Moss will likely get surgery as early as next week and will begin recovering immediately.

Thaddeus Moss Recovery Time: How Long Will TE Be Out? 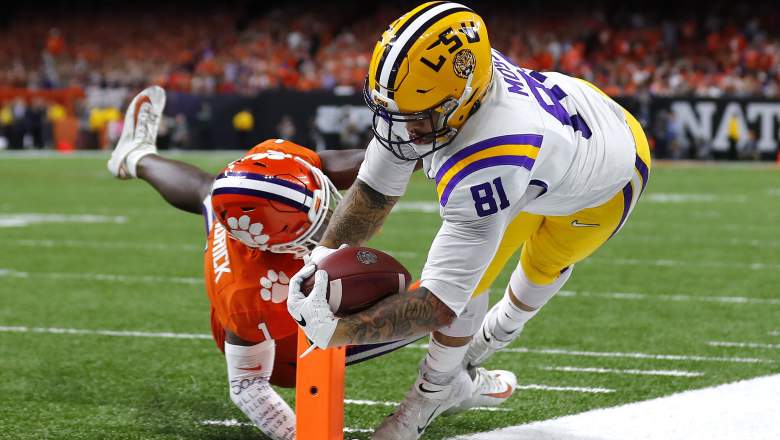 GettyLUS tight end Thaddeus Moss will undergo surgery on a fracture in his right foot. (Photo by Jonathan Bachman/Getty Images)

Moss has a broken bone in his right foot, and per the NFL Network’s Ian Rapoport, this particular injury will likely require six to eight weeks of recovery time.

Moss began his collegiate career at North Carolina State in 2016 before transferring to LSU the following year. He was forced to sit out the entire 2017 season as the result of transfer rules, and he missed the 2018 season due to a foot injury to his left foot, which Pelissero also noted in a subsequent tweet.

Worth noting: Moss also had foot surgery in 2018, but that was his left foot. Doctors discovered this injury to his right foot during the routine medical exam. https://t.co/OLUTlWlE5G

As a healthy junior last season, Moss had a breakout year catching passes from Heisman Trophy winner Joe Burrow. In 12 games, Moss caught 47 passes for 570 yards — both of which are school records– to go with four touchdowns.

Moss said at the start of the combine that he had not had any contact with one of his father’s former teams, the New England Patriots. He also noted that should fate take him to New England, he would welcome the opportunity with open arms.

Another positive? He has already met the coach and the owner of the team.

“I’ve talked to Coach [Bill] Belichick before,” Moss also noted. “I’ve talked to [Robert] Kraft. Probably my most fond memory is the undefeated season that they had. Obviously, they didn’t finish it the way they wanted to. That, and I was in the facility once or twice before, meeting Tom Brady when I was younger, sitting there starstruck. Walking down the hallway seeing Tedy Bruschi, seeing Coach Vrabel walking down the hallway when I was younger.”

Moss was the second athlete to miss combine drills due to a Jones fracture. Florida wide receiver Van Jefferson was also found to have one in his foot, with his timetable for return likely similar to that of Moss’.