Getty Defensive end Robert Quinn is one of the biggest free agent splashes made by the Chicago Bears. One Bears legend doesn't like it.

When the Chicago Bears signed defensive end Robert Quinn to a five-year, $70 million contract, many Bears fans and beat writers alike hailed the signing as one of the better moves in free agency.

Oh MAN. Oh MAN oh MAN. I may string together something tonight about Quinn alone because while I watched Leno's tape he EXPLODED off of it.

Quinn is the speed rusher the #Bears always wanted Floyd to be. Should be freaking DANGEROUS across from Mack https://t.co/b1qZFkaCvo

Not everyone was thrilled with the acquisition of Quinn, however. Hall of Fame linebacker and Chicago Bears legend Brian Urlacher went on the Waddle and Silvy show on ESPN radio Tuesday, and he had some thoughts about the Robert Quinn signing—and not many of them were good.

“This is not a knock on the player—I didn’t love the signing of Robert Quinn,” Urlacher began. “He had a great season last year, really good football player, I just don’t, you know, you pay Khalil all this money … and Akiem Hicks is a badass in the middle, making all this money. I understand you get rid of Floyd, but, I mean, do you need to spend that much money on another guy upfront?” Urlacher asked. “I’m just trying to divvy up the money here.”

The Bears signed Quinn to a five-year, $70 million deal a few weeks back, but the contract is structured in such a way that it’s essentially a two-year, $30 million deal, with $18.5 million going to Quinn in 2020 alone.

When co-host Marc Silverman went on to suggest he was surprised a defensive-minded guy like Urlacher didn’t approve of the Quinn pickup, Urlacher said he felt the Bears may have already had the talent to replace a departed Leonard Floyd already on the roster: in defensive end Roy Robertson-Harris.

Urlacher on DE Roy Robertson-Harris: ‘That Dude Made a Ton of Plays’ 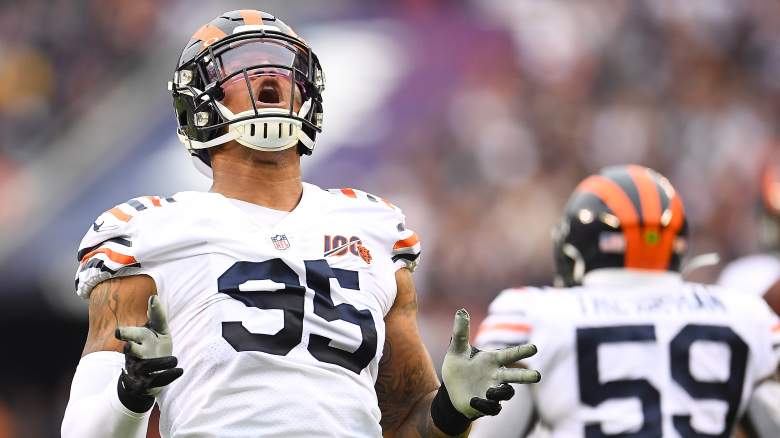 GettyRoy Robertson-Harris of the Chicago Bears celebrates after a sack during the first half against the Minnesota Vikings at Soldier Field. (Photo by Stacy Revere/Getty Images)

Urlacher couldn’t remember Robertson-Harris’ name at first, but he knew it when he heard it. “That dude made plays,” Urlacher said of the Bears’ defensive end. “I would think that you could find someone to put pressure from the side,” he added. “Khalil’s getting two guys no matter who’s over there anyway.”

Urlacher reiterated he held no ill will toward Quinn. “I love Robert Quinn. I have a lot of respect for him,” Urlacher said. “He’s a good football player. But I just didn’t love the signing with what we have going up front on defense. Our secondary’s good, you know, our linebackers are obviously good, so it just surprised me.”

Quinn was the sack leader for the Dallas Cowboys last season, getting 11.5 on the season. Robertson-Harris started seven games for the Bears in 2019, and had 2.5 sacks on the year. Robertson-Harris didn’t play on the edge much, but Urlacher seemed to think the Bears had the talent pre-Quinn to help Mack out on the other side.

Urlacher also noted that he felt the Bears still needed to shore up their offensive line, as it was a huge problem last year.