Getty Greg Olsen had a great explanation for signing with the Seahawks.

The Seahawks got NFL free agency started early by signing Greg Olsen after the Panther released the tight end. Olsen revealed that the Seahawks were “too good of an opportunity to pass up” in his first public comments since joining Seattle.

“It was just too good of an opportunity to pass up,” Olsen noted, per Seahawks.com. “Their track record of success, consistency of winning. I’ve played in this city many times, and just the fanbase, the excitement, that stadium is one of the more unique venues in all of sports. And obviously Coach (Pete) Carroll, playing with somebody like Russell (Wilson), it just checks so many boxes I was looking for, and I’m confident I can just come in and do my part and help try to put (us) over the edge.”

Olsen was rumored to have also been considering the Bills and Redskins after his release. Russell Wilson started publicly recruiting Olsen, and ESPN’s Adam Schefter reported that the Seahawks were one of the teams meeting with the tight end shortly after the Seahawks’ quarterback’s tweets.

The Seahawks Are Hoping to Utilize Both Greg Olsen & Will Dissly

Olsen’s signing does not mean it is the end of the Will Dissly era in Seattle. Dissly sustained a season-ending Achilles injury, but the Seahawks are expecting the tight end back for next season. Seahawks head coach Pete Carroll admitted that the team is “very fortunate” to have been able to sign Olsen.

“He can’t help but make an impression about his smarts, his awareness and his resolve to be great and to do something great and be a part of something,” Carroll said, per NFL.com. “He’s just on a high level, so we’re very fortunate to have him.”

As we’ve seen on social media, Olsen and Wilson have already been in contact. Carroll went on to say that he anticipates a “very fast transition” thanks to Olsen and Wilson working out together prior to the upcoming season.

“I think he’ll make a very fast transition,” Carroll explained, per NFL.com. “He and Russell worked in the spring time and when the summer time comes up they’ll be together often. I don’t think there’s any ceiling we should put on their ability to get together. I’m really excited about that.”

Olsen Will Wear No. 88 With the Seahawks

Olsen will wear his normal No. 88 after Dissly agreed to give up the number. Olsen agreed to donate to the charity of Dissly’s choice as Seahawks GM John Schneider detailed.

“[Olsen is a] great guy,” Schneider noted, per Seahawks.com. “[Olsen is] going to help that room a bunch…Diss [Will Dissly] is doing great. Greg’s going to wear 88. I guess they worked out a deal and the money is going to Dissly’s charity of his choice, which is pretty cool.”

Olsen signed a one-year, $7 million contract with the Seahawks as their first signing of the offseason, per Spotrac. Schneider noted both parties connected during the visit.

“Obviously we were excited to get him in, brought him in for a visit, had a great visit with him and kind of kept things going negotiations-wise,” Schneider told 710 ESPN Seattle. “We’re really excited for that room and what he’s going to bring.” 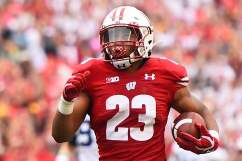 Seahawks Meet With Star College RB Prior to NFL Draft