Could we see Karl Joseph in a Chicago Bears uniform? Brad Biggs of the Chicago Tribune thinks it’s a definite possibility. The former first-round pick of the Las Vegas Raiders is an unrestricted free agent this offseason, and Biggs thinks he could become a target for the Bears.

Current Bears’ safety, veteran Ha Ha Clinton-Dix, is also an unrestricted free agent this offseason, and should another team out-bid the Bears for his services, he’ll likely be gone, leaving the Bears in need of a starting safety. Enter Joseph.

One safety that could emerge as a possibility for the #Bears is Karl Joseph. First-round pick of #Raiders in 2016.

Would Joseph be a good fit for the Bears? Here’s a look at his contract and numbers over his first four seasons: 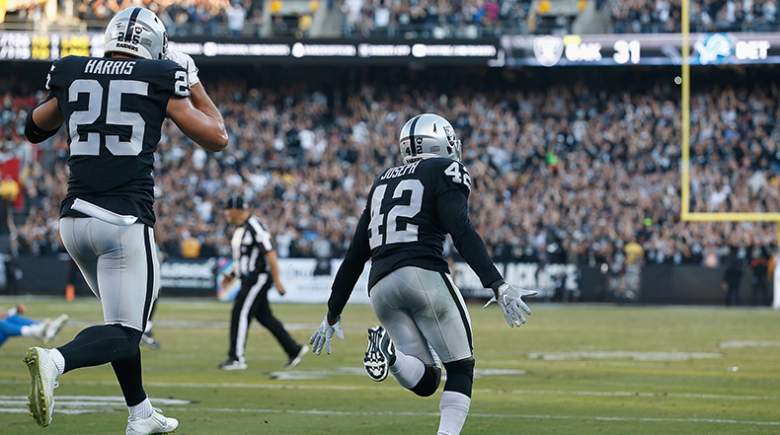 GettyLas Vegas Raiders Safety Karl Joseph is the current subject of trade talks. Could the Chicago Bears be a good fit?

According to Pro Football Focus, Joseph “will likely be available for a bargain fee,” which is good for a salary cap-strapped Bears team. He currently has an estimated market value of $6 million a year, which the Bears could absolutely afford.

Joseph is young — he turns 27 this fall — and despite a slow start and a few injuries, he has shown a great deal of promise. He tore his ACL back in 2015, but has only dealt with minor groin and hamstring injuries since. If paired with solid talent (like All-Pro Eddie Jackson) his ceiling could be quite high. Joseph has just four interceptions in his four seasons, and he has forced one fumble and recovered three in that time.

He does, however, do a great job in coverage. According to Pro Football Focus, Joseph “has hit double-digit defensive stops every season and shown the ability to be a solid force on defense. Joseph has talent, particularly in a coverage scheme that plays with split safeties, and he will likely be available for a bargain fee.”

Some have also suggested whichever team signs Joseph may get away with one of the biggest steals of free agency. He has never played on a defense the caliber of the Bears’ current one, and he could reunite on that side of the ball with former Raider superstar Khalil Mack. Signing him could be an affordable way for the Bears to snag a former first-round talent who still has time on his side.

READ NEXT: Multiple Veteran QBs are Linked to Chicago Bears in Latest Rumors