Getty Kirk Cousins and the Minnesota Vikings have agreed on a 2-year contract extension.

The commitment is real. On Monday, NFL insider Ian Rapoport tweeted that the Minnesota Vikings and their franchise quarterback, Kirk Cousins, have agreed to a two-year contract extension, per Cousins’ agent Mike McCartney.

The #Vikings have agreed to terms on a 2-year extension with QB Kirk Cousins, per @MikeMcCartney7.

Cousins’ new deal with Minnesota is for $66 million, and he’s slated to spend the next three years with the team. Here’s a breakdown of his new contract extension, his salary, and the the cap implications it will have for the Vikings. 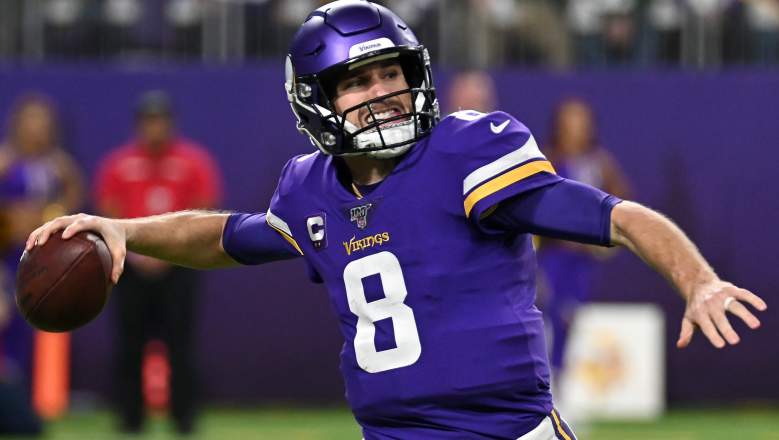 GettyVikings QB Kirk Cousins has just cashed in agains, signing a 2-year contract extension. He is slated to be the Vikings starter until 2023, when he will be an unrestricted free agent.

According to Spotrac, Cousins has an estimated market value of just over $33 million, so this contract seems to be in line fiscally speaking. He is slated to make $96 million over the next three seasons with the Vikings, with $62 million guaranteed. According to Rapoport, “An additional $35M is guaranteed for injury but converts” to a fully-guaranteed amount at the start of the 2021 NFL season.

Summing up the #Vikings deal for Kirk Cousins: 2 new years worth $66M. So 3 years in all for $96M. He has $61M guaranteed at signing. An additional $35M is guaranteed for injury but converts to a fully at the beginning of the 2021 season. They won’t cut him after 1 year and $61M.

Cousins signed a three-year contract in 2018 with $84 million fully guaranteed when he came over from the Washington Redskins, and he has proven himself as a very capable starter in this league, although his consistent struggles in prime time games remains a blight on his resumé.

Cousins currently is 7-15 in his career in prime time contests, and he has the worst record of any NFL quarterback in Monday Night Football history, going 0-9 as a starter. Still, his numbers in his two seasons with the Vikings are quite impressive.

He has thrown for 7,901 yards, 56 touchdowns, and 16 interceptions over the last two years, and he has a 103.0 quarterback rating during that time. He led Minnesota to the playoffs in 2019, winning the NFC Wild Card game against Drew Brees and the Saints before being ousted by Jimmy Garoppolo and the San Francisco 49ers in the divisional round.

Per ESPN’s Courtney Cronin, signing Cousins to an extension when they did allowed the Vikings to free up $10 million in cap space, which in turn allowed the team enough wiggle room to place the franchise tag on one of their best defenders, safety Anthony Harris. It was the first time since 2011 that the team has used the franchise tag on a player.

Kirk Cousins' extension cleared $10 million in cap space for Minnesota, which helped make tagging Anthony Harris a possibility. This is the 3rd time in franchise history that the Vikings have used a tag, following up on Jim Kleinsasser in 2003 and Chad Greenway in 2011.