It’s not looking good for Mitch Trubisky. After Chicago Bears general manager Ryan Pace refused to comment on or commit to his former second overall pick’s fifth-year option twice in three months, NFL insider Adam Schefter has reported that it’s looking like the team won’t be picking it up.

“Bears haven’t made any official announcement on whether they will pick up QB Mitchell Trubisky’s fifth-year option, but people around the league believe they will not. Should the Bears pick up Trubisky’s option, the salary projects to be over $24 million,” Schefter tweeted.

Bears haven’t made any official announcement on whether they will pick up QB Mitchell Trubisky’s fifth-year option, but people around the league believe they will not. Should the Bears pick up Trubiksky’s option, the salary projects to be over $24 million.

The Bears have until May 4 to decide whether or not they want to pick it up, but based on Pace’s evasiveness and Schefter’s latest report, it’s looking more and more like the team will let the quarterback competition between Trubisky and recent free agent acquisition Nick Foles ride until the 2020 season concludes. 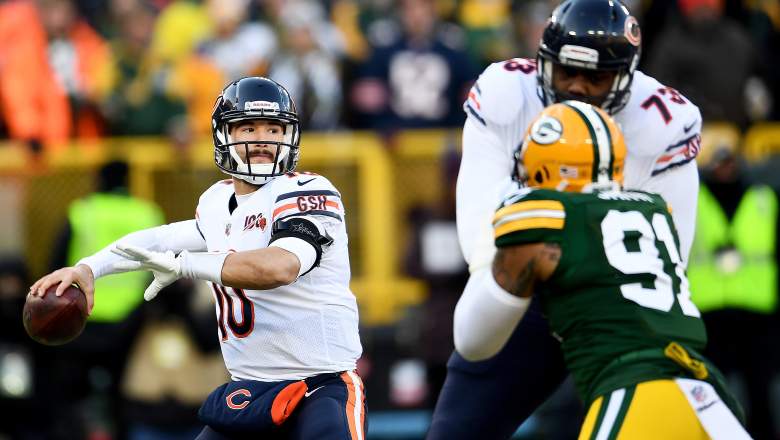 GettyBears QB Mitch Trubisky is going to have a ‘prove it’ year coming up ahead in the 2020 NFL season. (Photo by Stacy Revere/Getty Images)

When he was asked earlier in the week whether the team had reached any kind of decision on Trubisky’s fifth-year option, Pace refused to address it at all. “Right now our focus is all on the draft,” he said Tuesday morning. “We know we have until May 4 on that and we’ll cross that bridge once we get through this weekend.”

The weekend will be over soon, and May 4 will be here before Pace knows it. Right now, it’s looking like the team will refuse to pick up the option and let Trubisky fight for his football life with the Bears. He’ll have to beat Nick Foles first, and if he does and has a season similar to his 2018 effort, the team can simply franchise tag him moving forward.

Per Spotrac, Trubisky is due to make just over $4.5 million in 2020. The Bears signed him to a four-year $29 million deal as a rookie in 2017, which included a $19,254,490 signing bonus. As Schefter noted in his initial tweet about the subject, Trubisky would make around $24 million in 2021 if the Bears picked his option up now, and it seems Pace and head coach Matt Nagy just aren’t in a place with the fourth-year quarterback to do that.

The Bears are likely going to give Trubisky one last chance to be the team’s starter. If he can beat Foles and earn the spot while performing better than he did last year, that should be enough for the team to franchise tag him in 2021. Trubisky saw his rating drop from 95.4 in 2018 to 83 in 2019, and his completion percentage, rushing yards and touchdowns also fell off production-wise. He is younger and more athletic than Foles, but he hasn’t mastered reading defenses well enough to take that next step — and if he fails to best Foles, Trubisky’s days in Chicago are absolutely numbered.