The Chicago Bears roster is taking shape. Shortly after it was announced the team signed veteran wide receiver Ted Ginn Jr. to a one-year deal, Pro Football Talk and Brad Biggs of the Chicago Tribune reported the team has added former Houston Texans safety Tashaun Gipson. The Bears signed Gipson to a one-year deal after he was released by the Texans, whom he played with for just one season.

An eight-year veteran, Gipson will likely start opposite All-Pro Eddie Jackson. He was cut by the Texans this week just one year into his three-year, $22.55 million contract. Gipson finished the 2019 season on the injured reserve list, but he has 104 starts in 112 games. Gipson has $3.25 million guaranteed coming from the Texans, so it’s likely the Bears will be able to get him on a bargain deal.

Former Texans safety Tashaun Gipson has agreed to one-year contract with Chicago Bears, a league source confirmed. Was cut by Texans this week one year into three-year, $22.55 million contract

Tashaun Gipson's Chicago Bears deal is for one year, according to a league source. He already has $3.25 million guaranteed salary from Texans, that obligation reduced by his amount earned with the Bears

Gipson started 14 games in 2019 for the Texans before heading to IR with a back injury. He dealt with a transverse process fracture in his back for most of last season before finally heading to IR after Week 14. In his 14 starts last year, Gipson had 51 total tackles, eight pass deflections, and three interceptions, which included a pick six. His play-making abilities should be a definite asset to an already-scary Bears defense.

In his 104 starts, Gipson has 23 interceptions, 47 passes defensed, 13 tackles for loss and three defensive scores. His experience as both a free safety and strong safety will be hugely beneficial, and he’ll likely be competing against Deon Bush for the strong safety position, although he seems like the early favorite to be the starter.

Will Gipson Be Good Foil for All-Pro Eddie Jackson? 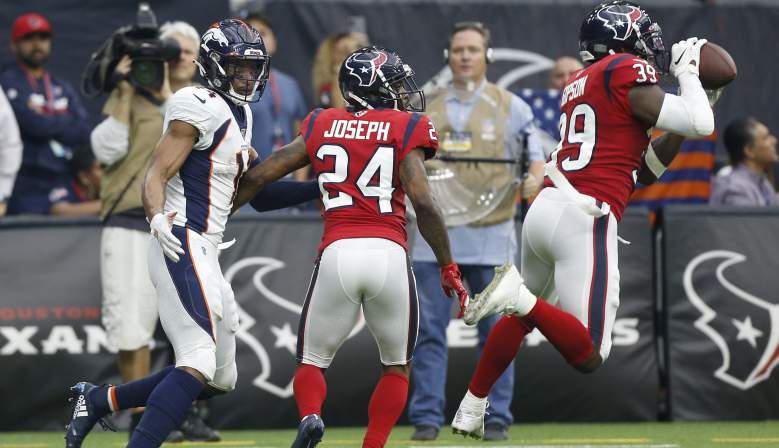 Gipson was signed by the Cleveland Browns as an undrafted free agent in 2012. He spent his first four seasons in Cleveland, where he started 42 games and made one Pro Bowl. He spent the following three years with the Jacksonville Jaguars, and was part of their lights-out defense in 2017. He started all 16 games for the Jags that year, and he hauled in four interceptions while netting seven passes defensed.

He has been an extremely durable performer throughout his career prior to his back injury last season, and the Texans decided to part ways with him anyway. Their loss should be Chicago’s gain. It’s widely assumed Jackson will go back to playing free safety, where his ball-hawk tendencies seem to shine brightest, and Gipson will join him, holding down the strong safety spot.

Is Gipson comparable to Clinton-Dix? At least stats-wise, he is. Last year for the Bears, Clinton-Dix started all 16 games, and had 78 tackles, two interceptions, two fumble recoveries and five pass defenses. Gipson had three picks, eight passes defensed, and 51 tackles in two fewer games. Gipson has also displayed a tendency to disrupt the backfield and get to the quarterback more than Clinton-Dix. In 2019, he had three QB hits and two tackles-for-loss, while Clinton-Dix had none.