Brian Urlacher spent 13 years in the NFL, all with the Chicago Bears. The Hall of Famer played in Chicago from 2000-2012, and was a core leader on the last Bears team to make the Super Bowl after the 2006 season. He and Chicago lost that game to Peyton Manning and the Indianapolis Colts with the much-maligned Rex Grossman under center.

Urlacher appeared on ESPN’s First Take Friday, and discussed his former team’s long, sordid history at the quarterback position leading up to present day, where the much-maligned Mitchell Trubisky is competing for the starting job alongside perennial backup Nick Foles. Urlacher shared his opinions on the Bears’ decision to bring in Foles, and he also had a surprising choice for the favorite Bears quarterback he ever played with.

Brian Urlacher on Nick Foles Trade: ‘I Didn’t Love’ It

When co-hosts Stephen A. Smith, Max Kellerman and Molly Qerim asked him how he felt about the Bears’ current quarterback situation, Urlacher let it be known he was Team Mitch.

“You know, I personally like Mitch. They went to the playoffs two years ago with Mitch as starting quarterback — the defense was great, I know that, but early on in the offseason, the Bears said ‘Mitch is our guy, we’re gonna stick with him, he was our No. 2 pick from a couple years ago,’ … and then you go trade for Foles about a month later, you know, I’m not sure how much confidence that puts in Mitch,” Urlacher said. “I didn’t love the trade. I like Nick Foles as a quarterback, he’s a really good quarterback. I just — if you’re saying a guy’s your guy, let him be your guy.”

Urlacher did acknowledge that by bringing Foles in, the Bears now have a better quarterbacks room than they have in past seasons, which is a plus. “I understand you have to have two good quarterbacks these days, and the Bears are in a good situation when it comes to that.”

He also shared which QB he liked playing with most, and it showed just how incompetent the Bears have been at the position for decades.

Urlacher: ‘I Think I Played With 20 Different Starting Quarterbacks’ 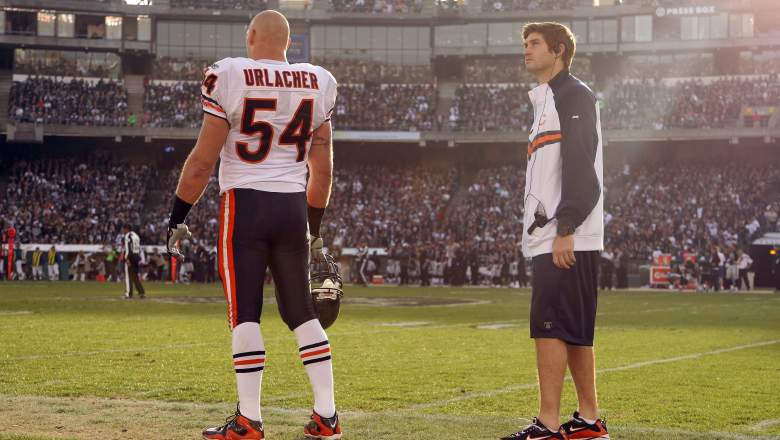 GettyBears legend Brian Urlacher revealed his favorite quarterback that he played with in Chicago.

Urlacher and company only made it to the one Super Bowl after the 2006 season, and they would have likely made more if only they had a solid leader at the quarterback position. “I think I played with 20 different starting quarterbacks in my 13 years there, and that’s a lot of guys to start at one position,” Urlacher said. He then shared his favorite QB during his tenure.

“My personal favorite guy to play with was Kyle Orton,” Urlacher volunteered. “I thought he did a really good job for us for a couple years there. Limited resources around him, but our defense was really good and he understood how good out defense was, so he wouldn’t turn the ball over … I think a lot has to do with the quarterback’s understanding of what his team’s good at, and Kyle understood that.”

This is notable largely because Urlacher also played with Jay Cutler for four seasons, from 2009-2012. Cutler was a bit of a turnover machine in his time with the Bears. He fumbled 65 times (recovering 20), and in the 102 games he started, he threw 109 interceptions. Urlacher was wistful in his hope the Bears can eventually find someone who can be their franchise quarterback.

“It’s really frustrating that we haven’t had a guy … that can get it done every year for us consistently,” he said.

You can watch Urlacher’s appearance on First Take below:

READ NEXT: Bears Predicted to Have Wild Finish vs Packers, Be NFL’s Last Unbeaten Team