Getty Green Bay Packers QB Aaron Rodgers has been a major thorn in the side of the Chicago Bears. Did they just do him an inadvertent favor?

Has Aaron Rodgers been so domineering in the NFC North that the Chicago Bears make huge team decisions because they’re afraid of facing the Green Bay Packers quarterback in critical situations? That’s the latest implication made by NBC Sports. The Bears voted against the proposed 4th-and-15 play that was suggested as a replacement for the onside kick, and their reasons for doing so may have just been revealed. The proposal would have given teams the chance to go for it on 4th down with a 4th-and-15 shot from their own 25-yard-lines instead of trying an onside kick.

When NFL teams voted on the proposal last week, they were split down the middle, with 16 teams voting for the 4th-and-15 replacement and 16 teams nixing the idea. The proposal is tabled — for now — but it will very likely be discussed and/or voted on again in the future.

How split were NFL teams on the proposal for a fourth-and-15 replacement of the onside kick? Sources say the unofficial straw poll was 16-16. No official vote was taken. Tabled for further discussion and a possible future vote.

The Bears were one of the 16 teams who voted against the idea of giving their quarterbacks — and the QBs of opposing teams — an additional opportunity to make magic happen on 4th-and-long, and one NFL analyst says their longtime rival may have helped shape their decision.

Mike Garafolo: Bears Voted ‘No’ On Proposal Because of Aaron Rodgers 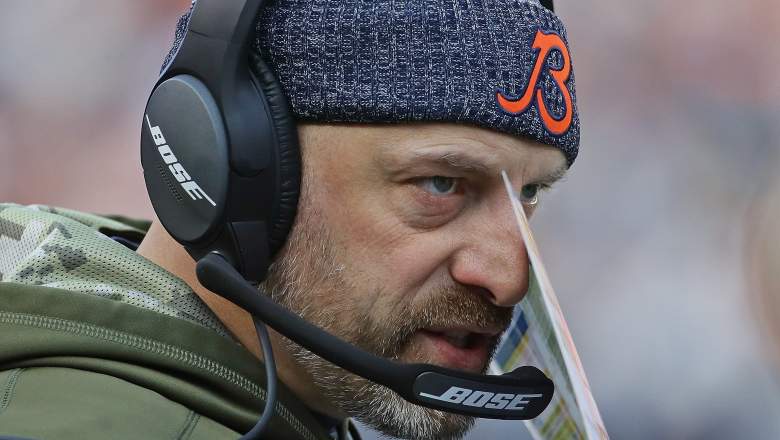 According to NBC Sports, NFL analyst Mike Garafolo said the Bears threw in an indirect reference to Aaron Rodgers when teams were discussing the impending rule change.

“One team said in jest, ‘if you have a future Hall of Fame quarterback on your roster, you should be excluded from the conversation.’ I’m told the team that joked about it was the Chicago Bears. So they were referencing Rodgers. How about that one?” Garafolo said.

Rodgers is 18-5 against the Bears throughout his career, and other than Tom Brady, Drew Brees (and maybe Ben Roethlisberger and Russell Wilson), he is the only sure fire Hall of Fame quarterback still playing. Rodgers has a history of miracle plays, from multiple Hail Marys to miraculous comebacks against the Bears, so it’s likely GM Ryan Pace and head coach Matt Nagy wanted no part of more potential Rodgers’ rallies. It’s also likely that their current uncertainty at the quarterback position made the Bears pause on the 4th-and-15 proposal.

Matt Nagy is 1-3 Against the Packers

When Lovie Smith came to Chicago in 2004, he said he had three goals, the primary of which was to beat the Green Bay Packers. From 2004-’07, the Bears were 6-2 against the Packers, which included a run of four straight victories at Lambeau Field. The Packers went 9-2 against Smith after that, so Chicago has not seen a streak of good luck against the Pack in a long time.

Matt Nagy hasn’t exactly gotten off to a good start against Green Bay, either. Nagy is 1-3 against the Packers in his first two seasons as the team’s head coach, and how he fares in his third season against Rodgers and company could go a long way to determining his future.