Baker Mayfield’s rough second season in the NFL trailed into the offseason, when the quarterback was dragged on social media for his physique in a photo on a boat alongside some of his pro football brethren.

But after some offseason work, it appears Mayfield is back on track as the season approaches.

Baker’s wife Emily posted a photo on a boat with her QB husband, showed off her “co-captain’s” trim physique, with a new haircut to boot.

The consensus opinion in the comments: Baker’s looking trim and ready for action.

On top of that Mayfield appears to have cut off quarantine hair he had grown out, seen in a conference call with reporters recently. 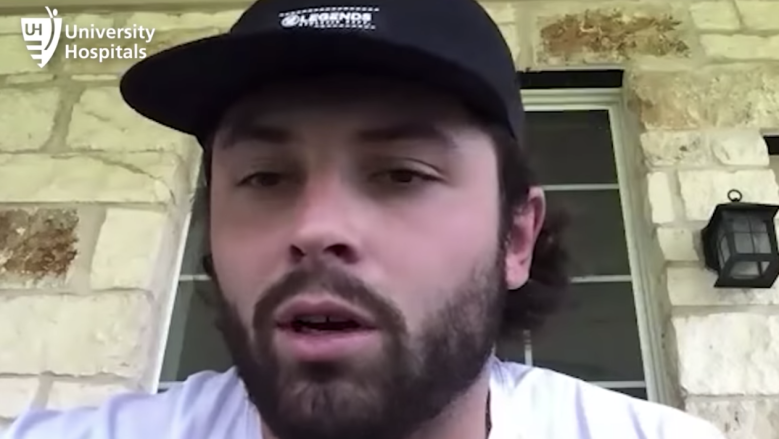 Cleveland Browns YouTubeBrowns QB Baker Mayfield during a conference call on May 27.

Mayfield’s fitness was called into question earlier this offseason when he came under fire for his “dad bod.” A picture that went viral showed a shirtless Mayfield posing next to NFLers Aaron Colvin, Alec Ogletree, Sterling Shepard and Saquon Barkley.

Quickly, the internet put Mayfield on blast, shaming the No. 1 overall pick in the 2018 draft for not looking ripped like his buddies.

boat pic pt. 2 but without a boat and for some reason Baker Mayfield and ALEC OGLETREE of all people are in this one pic.twitter.com/a93QFIaCNh

Giants running back Saquon Barkley, a good friend of Mayfield, stood up for the quarterback via TMZ.

“He’s a quarterback, he’s not supposed to be shredded,” Barkley said. “We in off-season, he’s gonna have time to get his body right. He can throw the ball 80 yards. That’s the only thing that matters.”

Mayfield has shown off his workouts multiple times this season on social media, even drawing praise from Tampa Bay Buccaneers QB Tom Brady.

Trying to keep my sanity during this quarantine period. #MambaMentality

It’s not the first shirtless photo of Mayfield to go viral. Before the draft, Mayfield appeared sans-shirt on the cover of Sports Illustrated.

Mayfield also drew quite the response for his underwear ad that featured him leaning on a Rolls-Royce with a tiger by his side.

Excited to announce my partnership with @PSDunderwear! Giving away 500 free pairs today. Tiger not included 😂. Give them a follow and shop my collection! https://t.co/Xy4RsMtas1 pic.twitter.com/6lt56PeWjw

Mayfield is entering a crucial third season and he hasn’t been shy about talking about it.

“There’s no doubt Year 3 is always a big year in these contracts,” Mayfield said. “Timing-wise, everybody knows that. I’m not going to put any added pressure on myself. There’s no need for that, because if I win, good things will happen.”

Mayfield is coming off a season where he passed for 3,827 yards, 22 touchdowns and 21 interceptions, ranking next-to-last in both passer rating (78.8) and completion percentage (59.4%).

Last offseason featured an endless stream of commercials, interviews and endorsements for Mayfield. Mayfield has said that he’s taking a different approach to this offseason, limiting what he does in terms of interviews and media (which has obviously been made easier by the restrictions in place due to COVID-19).

“I have a different approach to this year,” Mayfield said, per cleveland.com’s Mary Kay Cabot. “I think everybody who’s been interviewed on our team has hit the nail on the head over and over about ‘it’s time to work. It is time to do our thing, instead of talking about it.’ This is the first media thing I’ve done just because there’s no need to be talking about it. It’s just time to go do it. Right now, it’s kind of moving in silence, which is fine with me.”