Quinn expects the Browns former No. 1 overall pick to have a borderline historic year, leading Cleveland to the playoffs for the first time in nearly two decades.

Quinn — a former first-round pick of the Browns himself in 2007 — revealed his take on Mayfield to Mary Kay Cabot of cleveland.com this week.

“I think he’s going to have kind of a breakout year,” Quinn told Cabot. “I don’t know if you’d consider his rookie year kind of that, considering he set the rookie quarterback touchdown record, but I really do feel like this year is going to be a big jump for him. In watching him last year, he didn’t play as well as he needed to, but it was also a lot of things around him. So I’m kind of looking for that jump, not only for him but from the entire team because he’s going to have a better offensive line, a better running game [and more].”

“I think he’s going to have a breakout year, and I don’t know if you’d consider his rookie year kind of that, considering he set the rookie quarterback touchdown record, but I feel like this year will be a big jump for him. There’s no doubt he can be top 10’’

It’s not the first time Quinn has been bullish on the Browns. Earlier this offseason, he defended the Browns QB after his CBS Sports peer Ryan Wilson said Tyrod Taylor could end up having a better year than Mayfield.

“@OldTakesExposed go ahead and log the take above for 2020. You’re welcome,” Quinn said, later adding. “Don’t come at my Browns like that! Playoffs this year baby. Take that to the bank!”

@OldTakesExposed, go ahead and log the take above for 2020. You’re welcome.

Brady Quinn: Offense Will Take ‘Next Step’ Under Stefanski’

Quinn isn’t just going on his gut when it comes to Mayfield’s turnaround. He believes that head coach Kevin Stefanski’s new offensive system will benefit him in a big way.

“If you look at Stefanski’s system and a lot of the outside zone running scheme, a lot of the play action and the boots and the things off of that, they create a lot of space for you to be able to make some — I don’t want to say easy throws — but easier throws, downfield in some bigger windows,” Quinn said. “So Odell [Beckham Jr.] and Jarvis [Landry] when he’s healthy and everyone else, whether it’s Rashard Higgins, or David Njoku, all of those guys are going to be beneficiaries of this system and of the way they run the football and utilize Nick Chubb. I’m really looking for the entire offense — not just Baker — to really kind of take that next step.”

Brady Quinn: #Browns Baker Mayfield will be a top 10 QB in 2020 and 'playoffs this year, baby'; 2nd in our 'Baker Mayfield: Turning Toward '20' series https://t.co/ICuko6xVky

Quinn has also seen the drive from Mayfield to have a breakout third year, which started with him assembling teammates in Texas to put in work.

“To be honest, if you’re not doing that, you’re not keeping up with everyone else,” he said. “You’re really getting a step behind.” 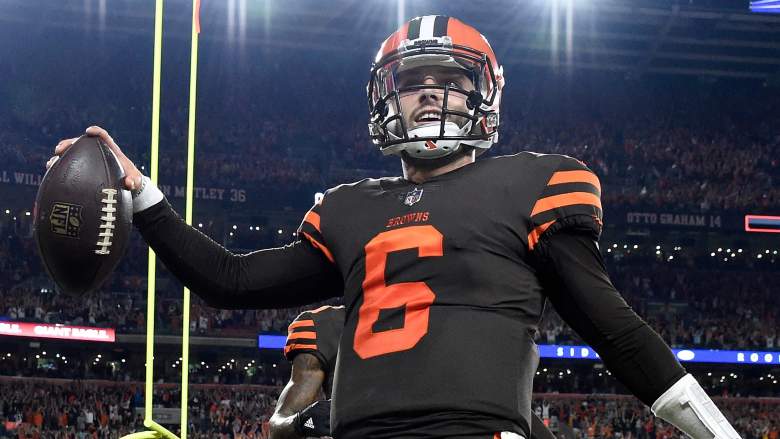 Mayfield finished the season with 3,827 yards, 22 touchdowns and 21 interceptions, ranking next-to-last in both passer rating (78.8) and completion percentage (59.4%). It was a far cry from his first year, when he set the rookie record for touchdown passes. However, Quinn believes a large part of Mayfield’s struggles came from the unreliable protection and bad game flows.

“When your offensive line isn’t protecting as well and when your defense is putting you in some tough spots, you have to press,” he told cleveland.com. “You have to take chances, because otherwise, what do you want him to do? Check it down and let the game end? How many of those interceptions came when they needed him to make a play but it ends up being intercepted. You don’t see the best teams in the NFL put their quarterbacks in that situation that often.”