Getty The Seahawks did not attend Colin Kaepernicks workout as the team originally planned.

Former Cleveland Browns head coach Hue Jackson said that he wanted Colin Kaepernick on the team in 2017, but the signing of the polarizing quarterback never manifested.

Jackson made the revelation on The Really Big Show on ESPN Cleveland on Friday.

“I wanted him,” Jackson said of Kaepernick. “I don’t know how close it was, but it wasn’t nixed from the beginning.”

Hue Jackson on wanting @Kaepernick7 : "I think now everybody is seeing exactly what he was telling people."

Kaepernick began protests against police violence and systemic racism by first sitting and then kneeling during the national anthem in 2016. His protest sparked a movement in the NFL, with multiple players following suit and the league even creating a policy in response preventing players from kneeling during the anthem.

“I am not going to stand up to show pride in a flag for a country that oppresses black people and people of color,” Kaepernick said following his initial protest. “To me, this is bigger than football and it would be selfish on my part to look the other way. There are bodies in the street and people getting paid leave and getting away with murder.”

It is widely believed that the protests cost Kaepernick his career and that he was blackballed by NFL owners. He has not signed with another teams since opting out of his contract in March of 2016.

Hue Jackson has Been Linked to Colin Kaepernick Before 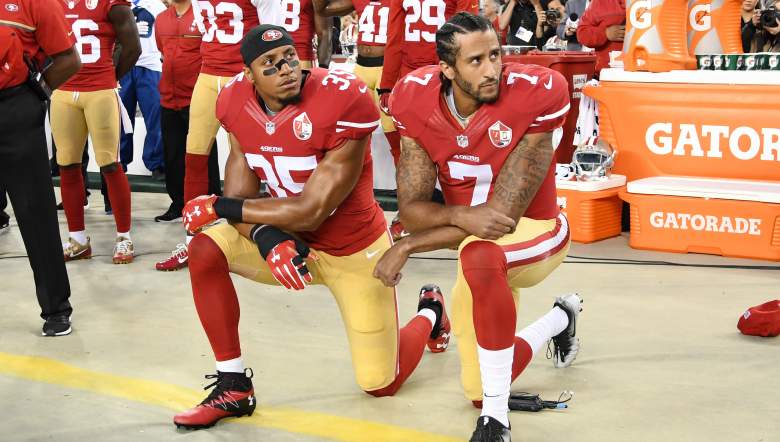 There is some evidence to back that statement. With Jackson at the helm in Cleveland, the Browns were in talks to trade for Kaepernick in 2016, but couldn’t reach a deal that would renegotiate his big salary at the time. Kaepernick had signed a six-year, $114 million deal in 2014. It would have made sense that the Browns pursued their trade target once he parted ways with the 49ers if it came with a lesser price tag.

Jackson also revealed to Sports Illustrated’s Albert Breer that he wanted to draft Kaepernick in 2011 when he was with the Raiders, heaping praise on the former Nevada standout.

“I wanted to draft him—he was the guy I wanted,” Jackson told SI. “Me and Al [Davis] were plotting a way to get him, and we just couldn’t quite figure a way to pull it off.”

Jackson has been linked with Kaepernick lately as well. The former Browns coach was set to lead Kaepernick’s high-profile workout last year, but backed out once the QBs crew went off script with a chance in timing and location.

“I felt a responsibility and obligation to the National Football League because they’re the ones who asked me to do it,” Jackson said.

Owners were worried about the optics when it came to signing Kaepernick in 2017, but Jackson believes the current protests following the death of George Floyd show the former 49ers QB is on the right side of history.

“I think everybody is seeing exactly what he was telling people,” Jackson said of Kaepernick. “The first step for Colin playing again, is him wanting to play. If he actually wanted to play, he would have a job.”

Kaepernick gave a strong statement after his workout last year saying he remains ready to play.

Colin Kaepernick made a 90 second statement before leaving pic.twitter.com/QlH2RTnLp5

“I been ready for three years, I’ve been denied for three years. We all know why I came out here and showed it today in front of everybody. We have nothing to hide. We are waiting for the 32 owners, 32 teams and Roger Goodell, all of them to stop running — stop running from the truth, stop running from the people. We are out here, we ready to play. We are ready to go anywhere. My agent Jeff Nalley is ready to talk to any team. I will interview with any team at any time. I been ready, I’m staying ready and I continue to be ready.”