Count Chicago Bears legend Brian Urlacher among those who were surprised when the Green Bay Packers selected quarterback Jordan Love in the first round of the 2020 NFL Draft.

Urlacher appeared on The Pat McAfee Show Wednesday, and the Hall of Fame linebacker discussed the upcoming NFL season, Patrick Mahomes’ new contract and the current Bears quarterback competition, among other things. When McAfee, who spent eight seasons as the punter for the Colts, asked Urlacher his feelings about the Packers’ decision to draft Love, the Bears legend rolled his eyes and shook his head, visibly annoyed.

“They’re forcing him out, they’re just forcing him out. ‘Hey, get the hell out of here, Aaron, we don’t care about ya,'” an animated McAfee said about Green Bay’s decision to draft another quarterback in the first round. Urlacher didn’t disagree.

Urlacher knows Rodgers and the Pack well. The former middle linebacker seemed to save his best games for Green Bay; he picked them off more than any other team he faced (he intercepted Brett Favre three times and Rodgers twice), and it’s clear he has loads of respect for Rodgers. When McAfee asked him what he thought of the Love pick, Urlacher didn’t hesitate.

“I was shocked at that draft pick, but they did the same thing to Brett [Favre]. They drafted Aaron in the first round when Brett still played, [and it was] what, three more years before Aaron got in there?” Urlacher said.

He then shared a laundry list full of all the reasons Rodgers is still an elite quarterback in his mind.

Urlacher on Aaron Rodgers: ‘He Still Gets it Done’ 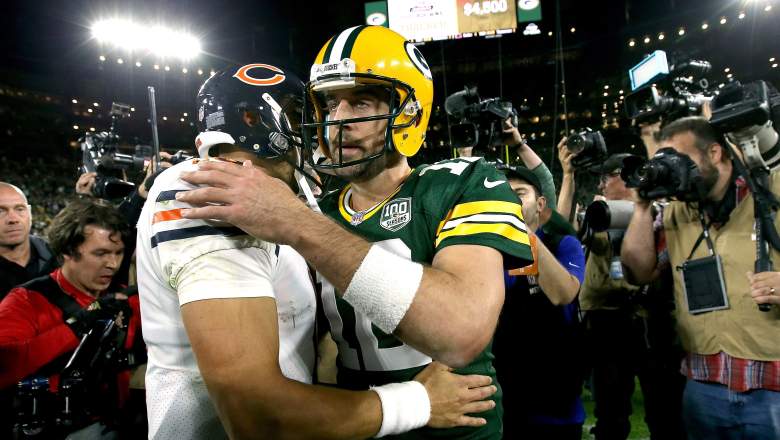 GettyImages Aaron Rodgers is 19-5 in his career against the Chicago Bears.

Urlacher spent the entirety of his 13 years with the Bears, and Green Bay, of course, is their biggest rival. While he didn’t praise the Packers’ organization in any way, Urlacher had loads of good things to say about Rodgers.

“Doesn’t look like he’s slowing down to me,” Urlacher said about the 36-year-old quarterback. “He still gets it done. The thing that’s amazing to me? Aaron doesn’t turn the football over. He gets all the pressure. He has good receivers, don’t get me wrong, he has Davante [Adams] and a couple other guys, but every year, it’s usually all on him. He does not turn the football over, doesn’t make bad decisions.”

It seems as though the respect is mutual. In 2018, Rodgers said this to Adam Hoge about Urlacher: “I think he’s the smartest player that I’ve ever played against. No one has played the position like he did, with the freedom to check in and out of coverage. And obviously, his talent is second to none.”

You can watch Urlacher’s interview with McAfee below.

READ NEXT: If NFL Season is Cancelled, Bears Could Still Snag Top QB in 2021 NFL Draft