Chicago Bears head coach Matt Nagy has always enjoyed incorporating fun into games and team practices, and this week, he outdid himself with his end-of-practice activity. When Nagy met with the media after practice Thursday, he shared what his team did for the last several minutes.

“At the end of practice today, we used about three minutes of our practice time, and just to keep it fun and lighthearted as we go, and break up the monotony of practice, we went ahead and shot a couple punts from the jugs [machine] up in the air, and — I don’t know if you all saw that or not — but we had Akiem Hicks versus [Germain] Ifedi for that, and there were some consequences there as to who catches it and who drops it, so I’ll let them tell you who won that.”

The team’s social media accounts then shared the too-good-to-miss footage of the Hicks vs. Ifedi showdown, and spoiler alert: it’s a good thing the Bears have All-Pro punt returner Tarik Cohen.

In the 30 second snippet shared by team accounts on social media, neither Ifedi nor Hicks caught a single punt — until the very end. Hicks, showing a bit of spryness in his step, finally snagged one to end the offense vs defense competition. Nagy didn’t reveal what the consequences were for the losers, but it’s clear based on the audio that fun was had by all.

9️⃣6️⃣ got special teams everywhere shaking in their boots. 😂 pic.twitter.com/De4BKr9Vtf

After Hicks came down with the ball, a huge celebratory roar filled the air just before he was swarmed by his teammates, including Eddie Jackson and Bilal Nichols.

Bears Are Glad to Have Hicks Back at 100 Percent 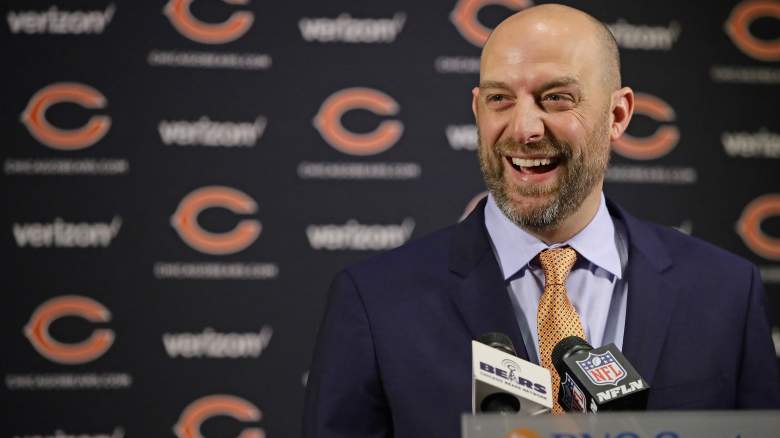 GettyChicago Bears Head Coach Matt Nagy has instilled a fun-loving atmosphere since getting hired in 2018. (Photo by Jonathan Daniel/Getty Images)

Nagy noted earlier this month that Hicks showed up to training camp in the best shape he has ever seen him in, and he was certainly looking pretty agile fielding punts.

Hicks played in just five games last season after missing significant time due to an elbow injury, and the defense missed him dearly. With Hicks, the Bears led the NFL in rushing defense in 2018. Without him, they were ninth in rushing defense in 2019, surrendering 102 yards a game. Players like Khalil Mack also missed Hicks’ presence, as Mack registered the second-lowest sack total (8.5) of his career.

Thus, it’s good to see Hicks out on the field again, and by all counts, he seems primed and ready to go.

Schedule release got my elbow feelin better! Long way to go but this was my first bench without a brace so I’m proud. Sound off🔇 for your own safety