Falcons will honor late Civil Rights leader John Lewis as one of their honorary captains on Sunday against the Seattle Seahawks, Dan Quinn told reporters on Friday.

“That’s a big deal in terms of the exposure and the impact Congressman Lewis had not just on Georgia but on the country overall,” Quinn told ESPN.

Lewis died this past July at the age of 80 after battling pancreatic cancer. A jersey with Lewis’ name will be placed on a seat at the 50-yard line.

After the senseless death of George Floyd, Falcons’ safety Ricardo Allen flashbacked to when he marched alongside Lewis to celebrate the 53rd anniversary of “Bloody Sunday” in 2018.

Allen figured with everything going on in the world right now, what better way to honor the legend himself at the Falcons’ home opener.

“We know John Lewis is a big part and a big reason that [Voting Rights Act] is part of the world today,” Allen told ESPN.  “So to be able to tie that in with our team and be able to do it with such a great man like John Lewis — someone that I’ve been blessed enough to go down and do the Selma walk with myself — you know I was all-in for it with him.”

Bloody Sunday: On March 7, 1965, a group of around nearly 600 protesters, led by civil rights activist John Lewis, attempted to walk from Selma to Alabama’s capital, Montgomery, for black voting rights.

The group was stopped at the bridge by state troopers carrying billy clubs, tear gas, and whips. Lewis suffered a skull fracture, others were reportedly hospitalized and over 50 suffered other injuries. Television cameras captured the violence causing a national outcry.

Bloody Sunday” inspired two more marches from Selma to Montgomery, this time led by civil rights leader Martin Luther King Jr. The third and final march was the one completed without interference.

The events led to the Voting Rights Act being signed into law by President Lyndon B. Johnson, prohibiting state and local governments to deny citizens equal rights to vote based on race.

At the passing of a true American icon, I join his family, the city of Atlanta, the state of Georgia and our country in mourning the loss of my dear friend Congressman John Lewis. Freedom fighter are words that were rightly associated with John all his life. He was awarded the Presidential Medal of Freedom for his decades of service as a Congressman representing our city and for his iconic work as one of the 13 original Freedom Riders during the most turbulent years of the civil rights movement. John wore the scars of a brutal 1965 beating he received while leading the history-changing ‘Bloody Sunday’ march in Selma — to those honored to know him, it was always a reminder that freedom isn’t free. John risked his life to end legalized racial segregation and make America a better place for us and future generations. That’s the enduring legacy of one of the most courageous people I ever met. May he rest well and at peace after such a meaningful, purpose-filled life. 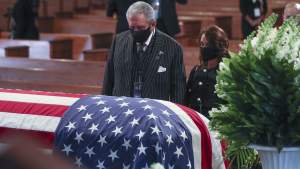 After player introductions, the Falcons will observe a moment of silence for Lewis’s perseverance.