Getty Andy Dalton #14 of the Dallas Cowboys looks for an open receiver against Dante Fowler Jr. #56 of the Atlanta Falcons.

The Falcons have been searching for a top pass rusher for quite some time and thought they had it in ex-Rams edge Dante Fowler.

But, that hasn’t been the case as Fowler has underperformed with just two sacks in 13 games compared to his 11.5 sacks with Los Angeles last season.

Interim head coach Raheem Morris didn’t back away from calling Fowler out for his decline:

“It just wasn’t good enough for the standard that he’s provided for himself or for the standard the Atlanta Falcons have for him,” Morris said on Wednesday. “Obviously, he wants to go out and be a disruptor every single time, he wants to get after the quarterback and he has not been able to do that enough this year whether its been COVID whether it has been an injury, whatever the case has been. A lot of things in this business you don’t have time for excuses for and he won’t be one of those guys to make excuses. We have to get him going, he’s a guy we have big plans for, and we’ll figure out where we can go next with him.”

Fowler fired back at Morris’s comments via Twitter but then must have remembered what happened to Takk McKinely when he tweeted at the Falcons and quickly deleted his tweet. 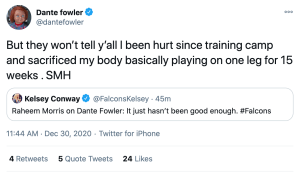 What he tweeted was different from what he said to reporters. When asked about Morris’s comments he agreed with everything he had to say.

“In order to be the best edge rusher in the league, you have to put up double-digits [sacks] every year,” Fowler said. “That’s my job, that’s my goal to be consistent every year come out with double digits.”

Dante Fowler says he respects Raheem Morris 100 percent and he loves the way he coaches. He said he hit it on the head, it "wasn't good enough this year."

Fowler Had High Expectations Heading Into The Season

Heading into the 2020 season, Fowler had high expectations for himself and regarded himself as one of the best past rushers in the league.

“I feel like you either get better or you get worse”, Fowler said when the Falcons signed him in the offseason. “It’s really cool to just show you guys that I’m a consistent guy, that I can come out here and get double-digit sacks a year. And go out there and play a huge role on my defense and on the team as far as being a spark—being a spark, setting a tone, playing off of each other. Making opportunities for not only myself but for my team. This was always my dream, to always be put in this position.”

Fowler did injure his ankle in training camp and that’s always hard to overcome. He also hurt his hamstring and was placed on the COVID-19 list.

Whether or not Fowler’s production declined due to some unknown serious injury is unclear but it’s no excuse for having just two sacks on the season.

The Falcons signed Fowler to a three-year deal worth up to $48 million, we’ll see what happens in the offseason.

READ NEXT: Falcons Coaches Linked to 49ers if Saleh Leaves