Dennis Schroder has been the butt of many jokes in recent weeks for his inability to net a big payday this summer. From Shaquille O’Neal mockings to Twitter roastings, the NBA world has refused to let the former Los Angeles Lakers point guard live down his financial gaffe.

After what proved to be a relatively dry market for Schroder, he recently opted to settle for a one-year, prove-it deal with the Boston Celtics for the taxpayer mid-level exception of $5.89 million. Undoubtedly, this was a far cry from the rumored $100-$120 million contract he was seeking, or even the $84 million extension that ESPN’s Brian Windhorst reported that he rejected from the Lakers back in March — the true culprit in the Schroder slander.

However, Windhorst’s colleague, Jay Williams, has since gone public in an attempt to debunk the previous reports of Schroder ever truly being offered a deal from the Lakers.

“A lot [of] comments [about] Dennis Schroder lately ‘turning down 4yr 84 mil’. But what I’m hearing from a credible source is that there was never an ‘official’ offer made,” Williams tweeted. “Interesting!”

Fans have since littered Williams’ replies to call out the legitimacy of his source, sharing screenshots of Schroder seemingly acknowledging the extension offer, yet refusing to sign it until the summer. 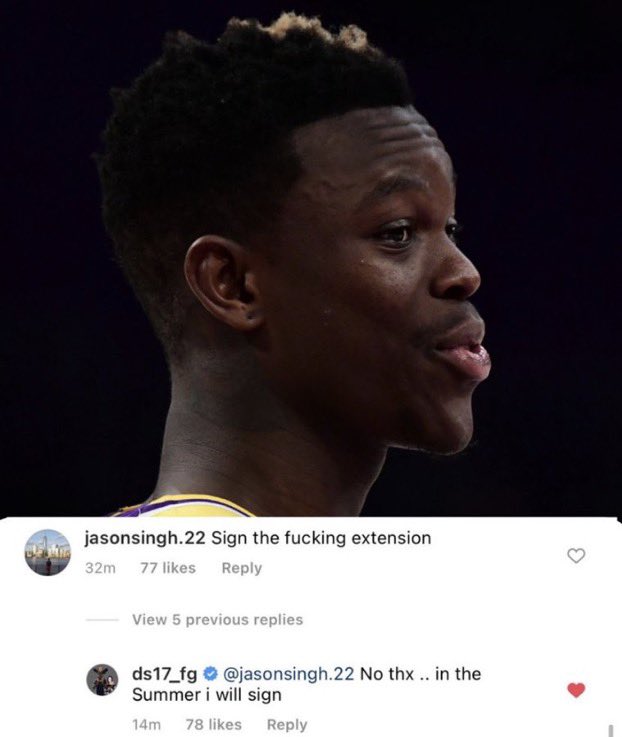 Chances are that Schroder — who at the time was the league’s reigning Sixth Man of the Year runner-up — and the Lakers at least engaged in contract talks. Whether those talks led to a formal offer from the team is evidently up for debate. Yet, Schroder’s bullishness to wait until the summer to ink any deal could have easily been the driving force in an “official” extension offer never being made.

Schroder’s Wife Has Message for Haters

Whether Schroder was offered an extension or not, the German guard won’t likely be living down the way his free agency experience played out anytime soon. Still, Schroder’s significant other, Ellen Ziolo, is proud of her man for his commitment to bank on himself. Ziolo took to Instagram to praise her husband for not letting money dictate his decision and voice her excitement for what lies ahead.

“I’m so proud of my husband that he made this decision to stay true to himself and to fight for his goals and his vision! I know not everyone understands this… they would choose money before anything else… but let me tell you: show some love, be patient and watch what happens next.”

Schroder is coming off an up-and-down campaign with the Lakers where he averaged 15.4 points and 5.8 assists in 61 games. Yet, while he may prove to be nothing more than a one-year rental for the Celtics, Schroder has a chance to exponentially rebuild his stock operating in Boston’s backcourt alongside Marcus Smart. With both Kemba Walker and Evan Fournier no longer in town, it’s not out of the question to envision a scenario where Schroder begins to once again resemble his 2019 form with the Oklahoma City Thunder. If that proves to be the case, don’t be surprised if his market is far more active come this time next offseason, where he’ll still be just 28 years old.

Loading more stories
wpDiscuz
0
0
Would love your thoughts, please comment.x
()
x
| Reply
A new twist emerges on the contract situation leading up to Dennis Schroder's signing with the Boston Celtics.