Getty Jayson Tatum #0 of the Boston Celtics takes a shot as Dennis Schroder #17 of the Los Angeles Lakers looks on during the fourth quarter at TD Garden.

Move over Jayson Tatum, Dennis Schroder’s here to give your viral physique a run for its money — well, not so fast. While the free-agent signee won’t be stepping on stage at the Olympia any time soon, the 172-pound Schroder looks to be dialed in ahead of the Celtics season-opener which is set to tip off in a little over a month.

After missing out on a boatload of money, being dragged through the mud for his lack of financial acuity and ruffling feathers in the Lakers‘ organization, it’s been a whirlwind summer for the former Sixth-Man of the Year runner-up. Thankfully, for the Celtics’ sake, Schroder appears to have channeled all the backlash into motivation. The 27-year-old took to Instagram after a recent workout to flaunt his diced build. 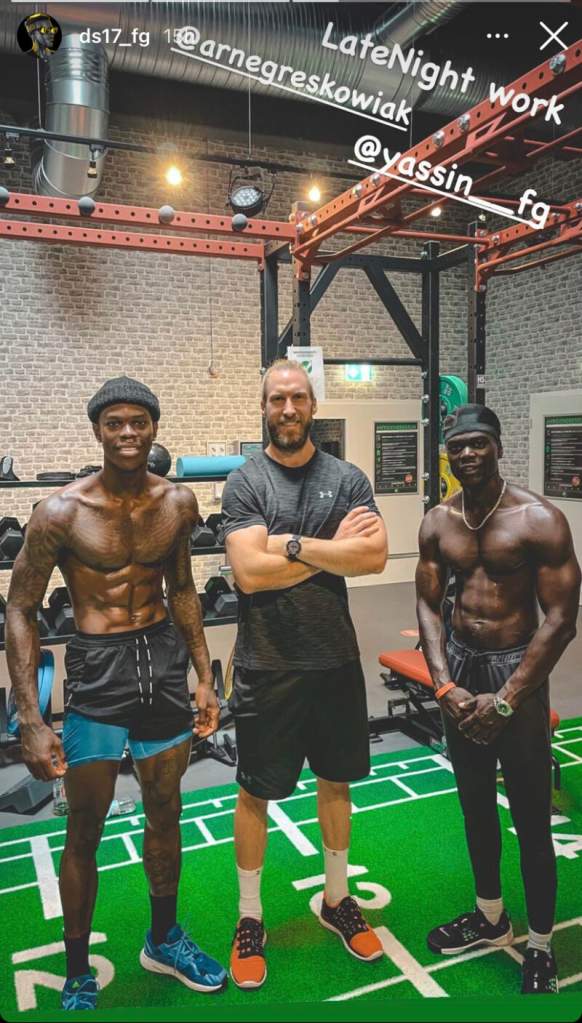 Over his eight-year NBA career, Schroder has bounced in and out of starting lineups. This past season he served as a full-time starter with the Lakers in a campaign that could best be described as a mixed bag. In 61 starts, Schroder put up a respectable stat line of 15.4 points and 5.8 assists. The latter was actually his best output since 2017. However, his field-goal percentage (43.7%) and 3-point percentage (33.5%) each took a sizeable dip.

Now in Boston, while nothing has been finalized the belief is that Marcus Smart, not Schroder, will man the lead point guard duties this season.

“Marcus hasn’t always been the starting point guard or a guy who’s had the ball in his hands a ton, and he’s yearning for that,” coach Ime Udoka said on WEEI’s Gresh & Keefe. “So we’ll entrust in him to have more responsibility on his hands.”

If Smart does in fact serve as the starting point guard, that would leave Schroder to either flag Smart in the backcourt, or more likely, come off the bench as the team’s sixth-man — a role he’s proven highly effective at in the past. In 2019-20, as a member of the Oklahoma City Thunder, Schroder appeared in 65 games, starting just two. Over that span, he averaged nearly 19.0 points per game while shooting a career-best 38.5% from 3-point range. In fact, all three of Schroder’s campaigns where he has shot 34.1% or better from deep came while he was primarily a bench player.

Will Schroder ‘Prove-It’ in Boston?

Schroder has remained fairly quiet on his perceived whiff this offseason. After reportedly turning down an $84 million extension with the Lakers last offseason, the point guard was hoping to cash in on a deal north of $100 million, per Armin Andres, the VP of the German Basketball Federation. That clearly never materialized, as Schroder was met was an extremely bleak market. With very few bites, he opted to settle for a one-year, prove-it deal with Celtics worth just $5.9 million.

Now a motivated, and evidently in shape, Schroder will look to change the narrative surrounding him in Boston this season with hopes of landing a big contract next season.

“He [Schroder] knows there’s a lot at stake for this season. I think his approach, his mindset, his mentality is going to be different going into this year,” Blazers guard CJ McCollum said on his “Pull Up” podcast. “I think this will be a good year for him to show what he’s kind of capable of in Boston. Play alongside some good players and potentially try to earn back some of that money he allegedly turned down.”

Discover more from Heavy on Celtics↓

Unlock the latest Boston Celtics news, rumors and exclusives — direct to your inbox. ↓