It was only one year, that 1994-95 season in the heart of a down NBA period for the Celtics, but somehow the brief Dominque Wilkins era in Boston remains a happy time—for both the Celtics faithful and Wilkins himself.

In fact, when it came up in an interview with Heavy.com this week, Wilkins chimed in to say that he liked the city so much, he stuck around.  “I ended up staying in Boston for five years after that, I lived out in Dover, Mass., near Wellesley,” he said.

Wilkins’ arrival in Boston came at a particularly bleak time for the Celtics, who had seen the retirement of star forward Larry Bird at the end of the 1991-92 season, followed by Kevin McHale in 1993. Two months after McHale left the game, young star Reggie Lewis died while practicing, sending a proud franchise into a tailspin.

Wilkins’ arrival, though, kept the team from falling apart altogether, and the Celtics went from 32 wins to 37, good enough to earn a playoff spot.

“The one thing, Boston fans, I have always said this, are some of the most knowledgeable fans when it comes to the game of basketball,” Wilkins said. “Sports, period. That’s a sports town. I must say, they treated me with nothing but respect the year I was there. We went to the playoffs that year when nobody expected us to make it. It was a fun thing.”

There was even talk, as former team GM M.L. Carr claimed, that the Celtics would look to bring retired Bulls star Michael Jordan out of retirement to pair with Wilkins. Bulls GM Jerry Krause denied that such talks ever happened, but Carr maintains he’d made an offer for Jordan’s rights.

“That would have been nice,” Wilkins said, laughing. “We would have gone farther in the playoffs, that is for sure.”

Wilkins on Larry Bird: ‘We Didn’t Talk to Each Other Off the Court’

Wilkins had, of course, been a hated rival of the Celtics for much of the 1980s, when his Hawks were one of the top challengers to Boston’s Eastern Conference dominance. He famously scored 47 points on 19-for-23 shooting against the Celtics in a 1988 second-round playoff game—a Game 7, no less—but Bird responded with 34 of his own, including 20 in the fourth quarter. That was the difference in the series.

I think my rookie year, he said some things that I won’t say on this video. But Larry and I had the utmost respect for each other. You’re talking about a competitor, it’s hard for me to think you’ll find another like Larry. …

We didn’t talk to each other off the court. We barely shook each other’s hand. I did not shake Larry Bird’s hand for 13 years. That’s just the way it was. As a great player, you did not want any other players to get that close to you. Larry did not even say two words until he was on the floor with you. He talked trash, a little bit of trash.

Wilkins will be traveling to Cleveland this weekend as part of the NBA’s 75th anniversary celebration, where he will be honored among the 75 greatest players in league history. He is also working with Michelob Ultra on a project to bring back the fun of the old NBA Jam TV show, which will include interactive fan opportunities at the Boom Shaka Laka Barcade and performances from D.J. Jazzy Jeff and rapper Fat Joe. 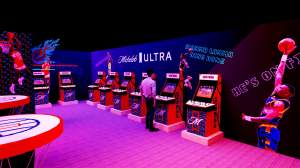 “It’s going to be a fun weekend,” Wilkins said. “I am excited about the partnership with Michelob Ultra to bring back and relive some of the glory days of the NBA All-Star weekend, and the 75th anniversary to be celebrated—hopefully fans will get a chance to be around a lot of these iconic players. We’re looking forward to Michelob Ultra taking over All-Star weekend.”

Loading more stories
wpDiscuz
0
0
Would love your thoughts, please comment.x
()
x
| Reply
Dominique Wilkins had one memorable season with the Celtics in the 1990s.