Despite averaging an impressive 23.6 points and a career-high 6.6 rebounds per game, Boston Celtics wing Jaylen Brown has been snubbed from this year’s NBA All-Star game — on multiple occasions.

After failing to get the nod during the original All-Star announcements, the Cal product’s candidacy was once again brought to light when it was revealed that Kevin Durant (sprained MCL) and James Harden (hamstring) would opt out of the game due to injuries. However, those two spots ultimately went to Charlotte’s LaMelo Ball and Cavaliers big man Jarrett Allen, respectively.

Neither Brown nor his teammates have been shy about their belief that the 25-year-old deserves a second-consecutive All-Star nod. On February 14, fellow Celtic Grant Williams even shared a meme on Twitter from the hit HBO series “The Wire,” suggesting that if Brown doesn’t make the team then “this game is rigged, man.”

This notion was thoroughly backed by teammate Jayson Tatum on Twitter and by the looks of Brown’s recent social media, No. 7 is also on board.

‘Jaylen Brown Should Be An All-Star’

Don’t take my word for it, take Brown’s. On Wednesday, February 16, on the heels of a 29-point, eight-rebound performance in a beatdown victory over the Philadelphia 76ers, Brown took to his Instagram stories to sound off on his All-Star snub. Not holding any punches, Brown shared a meme of Grammy award-winning rapper Kanye West holding a legal pad with customized writing plastered on it to drive home his point. 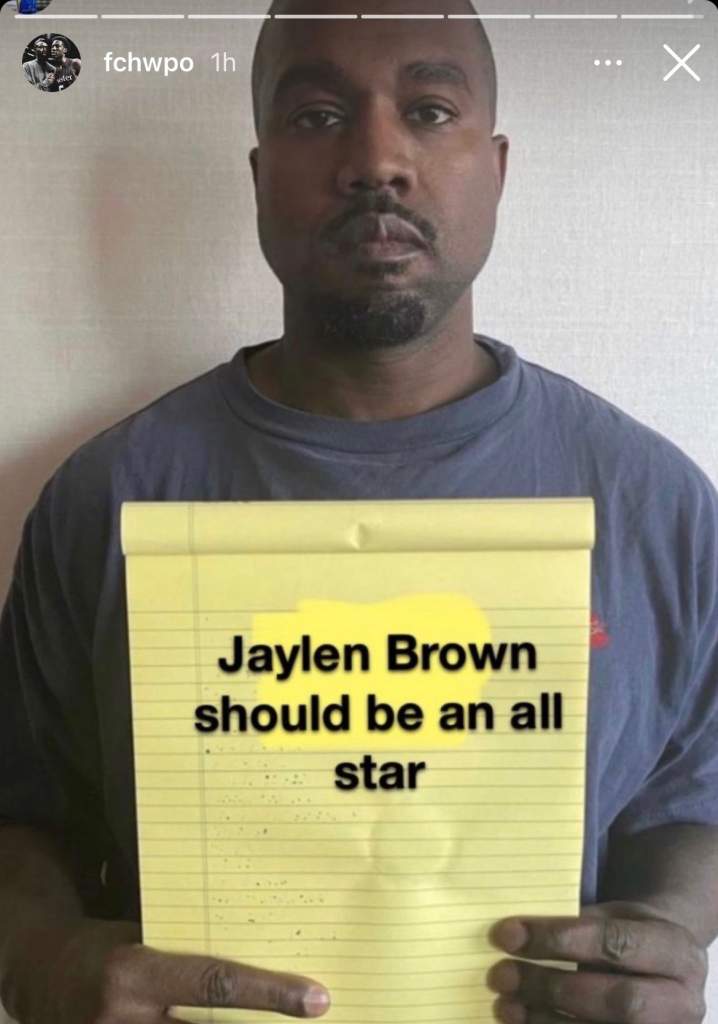 With Brown omitted from the Eastern Conference roster, this means that Tatum will be Boston’s lone representative at the 2022 All-Star Game on February 20. The 24-year-old superstar was originally named as a reserve for this year’s game but was promoted to the starting lineup as a replacement to Durant. This marks Tatum’s third All-Star berth of his career and the third in as many years.

As for Brown, while missing out on the All-Star game may sting, the C’s standout has bigger things to focus his energy on. Such as his Celtics blossoming into what some might perceive as legitimate title conders in front of our very own eyes.

Celtics Making Noise in the East

After a 48-point victory against the Sixers on February 15, the Celtics now sit just 3.5 games out of first place in the East,  an inconceivable feat not so long ago. However, Boston has since turned over a new leaf, rallying off nine consecutive victories, thanks in large part to some tenacious team play on the defensive end.

“This is probably one of the better defensive teams in my career,” Brown told reporters following the win over Philly, via CBS Boston.“We’ve had some really good defensive units, but it feels hard to score on us. It feels really good, feels connected.”

Brown added, “we got a lot of guys each and every night stepping up on that side of the ball. I don’t think they get enough credit. Rob [Williams] has been fantastic, [Marcus] Smart, of course, is going to be Smart. [Jayson Tatum] — we’ve been playing both sides of the ball all season, and we’re still getting better.”

Brad Johnson, an NFL journeyman who made two Pro Bowls, quarterbacked the Bucs that season. The Bucs just needed Johnson to be a good game manager with solid talent on offense, which was backed by an all-time great defense.

quarterbacked the Bucs that season. The Bucs just needed Johnson to be a good game manager with solid talent on offense, which was backed by an all-time great defense.

[ JOIN US ] I get paid more than £70 to £100 per hour for working online. I heard about this job 3 months ago and after joining this I have earned easily £14000 from this without having online working skills..…21 . Simply give it a shot on the accompanying site…
Weekly payments…… https://www.salarybaar.com/