Getty Jayson Tatum #0 of the Boston Celtics reacts during Game Four of the Eastern Conference first round series against the Brooklyn Nets.

While Javonte Green never truly flourished on the hardwood during his two-year stint in Boston, his friendship with Celtics superstar Jayson Tatum most certainly did. The two developed into extremely close pals, or as Tatum put it in a recent Instagram story, went from “real strangers turned into brothers.”

Unfortunately, despite some speculation of a Celtics homecoming earlier this offseason, the two won’t be sharing any regular-scheduled play-dates alongside one another in the near future.  Instead, Green will continue to roam the court opposite of Tatum, re-upping with Eastern Conference rivals, the Chicago Bulls. According to ESPN’s Adrian Wojnarowski, the 28-year-old wing will be returning to the Windy City on a two-year deal.

Green and Tatum’s working relationship came to a screeching halt at March’s trade deadline when the Radford product was traded to the Bulls as part of a three-team deal that also included the Washington Wizards. The Celtics’ decision to trade Green clearly struck a chord with the typically soft-spoken Tatum, who — as seen in a postgame interview directly after the trade — was admittedly caught off guard by the whole situation.

“I didn’t see that coming,” he said of the Green trade following a win over the now-reigning NBA champion Milwaukee Bucks. “He was someone I was super, super close with. I loved having him around. That was tough, for all of us. Especially for myself, too. [Green] was someone I was real close with as a friend. Obviously, he helped us in the locker room, in the time he did get opportunities. I guess this is just part of it.”

As mentioned earlier, some were theorizing that Green could find his way back to Beantown this offseason — with Tatum being the main culprit fueling such speculation. On July 23rd, Tatum took to Instagram to wish his friend a happy birthday, which he capped off with an interesting tidbit.

“Happy birthday my dawg! Real strangers turned into [brothers]!” he wrote. “We running it [back] this year too,” which he then capped off with a clover emoji for added emphasis. 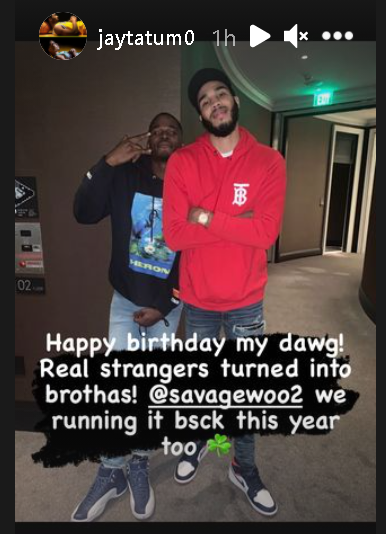 What Boston Misses Out On

Whether it was a case of simply digging too deep into Tatum’s words or Green opting for what he perceived as a better opportunity in Chicago, not adding the latter’s services to Boston’s lineup doesn’t do much from an on-court perspective. While a serviceable depth piece and a sparkplug off the bench during his Celtics tenure, Green still only averaged 3.7 points, 2.0 rebounds and 0.5 assists per game over his 73 contests (four starts) with Boston.

His production in Chicago was even less impressive. He endured a dip across the board as he failed to find his footing in Billy Donovan’s rotation. Over 16 games with the Bulls, Green averaged 2.6 points, 1.2 rebounds and 0.4 assists.

Yet, as we previously highlighted back in July, with Tatum’s player option looming in the near future, adding a player such as Green goes well beyond the box score.

However, Green’s hinted at re-addition to the Celtics’ roster goes well beyond the box score, or even what he brings to the hardwood. When it comes down to it, no Celtics player matters as much to the franchise’s current and future success as Tatum does. With that in mind, as well as the fact that he has a player option set to kick in after the 2024 NBA season, you want to keep the two-time All-Star as happy as humanly possible.

If that means making a run at Bradley Beal, go for it. If that means filling a bottom-end of the roster spot with a close friend in Green, do it. As long as the organization doesn’t favor Tatum’s preferences over what’s best for the team as a whole, they should at least entertain keeping their star content.

Loading more stories
wpDiscuz
0
0
Would love your thoughts, please comment.x
()
x
| Reply
There won't be a Boston Celtics reunion after all.