Getty Los Angeles Lakers star LeBron James warms up prior to a 2021 game against the Boston Celtics.

The Boston Celtics had an incredible opportunity to put themselves in the driver’s seat of their NBA Finals bout with the Golden State Warriors on Friday. And, with three and a half quarters of Game 4 on the books, it looked like they might just do it.

At the 5:18 mark of the final frame, with the shot clock expiring, Marcus Smart buried a contested triple to bring the Garden crowd to its feet and give the Celtics a 94-90 lead.

Unfortunately, that was followed by a four-minute scoreless drought that included six straight misses, five of which came from deep and the majority of which were contested looks. The Celtics went on to lose 107-97 and, as a result, the series will revert to San Fran in a 2-2 deadlock.

The way it went down was so jarring to witness that a pair of the Beantowners’ old rivals — LeBron James and Dwyane Wade — shouted it out it via Twitter.

“Bad shot selection vs GS = [skull emoji],” wrote James, which prompted a Wade quote-tweet and the response: “From here on…it will be all about the little things.”

The Celtics Know They Can Do Better

For his part, Celtics coach Ime Udoka seems to agree with the former Heat duo’s assessment. At the very least, he probably wishes he could have some of his club’s late shots back.

“We would like to get a little bit more downhill and get some things to the rim and kick out. Credit to them. They stepped up defensively when it counted. Our offense wasn’t as sharp as it needed to be, no doubt,” Udoka said after the game. “…Every time we got a five, six-point lead, it felt like we made some poor decisions.”

Jayson Tatum was particularly ineffective when Boston needed him the most. The Celtics star missed seven of his nine shot attempts during the second half. As he sees it, he needs to do a better job of recognizing and taking advantage of the good opportunities when they present themselves.

“When I do have space, I’m open, I got to take the shot,” Tatum said. “Obviously, any time I hold it too long, they load up and things like that. I think just quick decisions, don’t turn down any open looks, any daylight that I have, just continue to try to make the right pass.”

Tatum on the Verge of Making the Wrong Kind of History

While Tatum’s 8-for-23 shooting performance and fourth-quarter vanishing act are catching significant heat, his six turnovers certainly didn’t help matters for the C’s, either. But coughing up the rock is nothing new for the three-time All-Star; he’s been doing it at an incredible rate this postseason.

So much so, in fact, that he’s on the verge of setting a new NBA record for total turnovers in a single playoff run.

Entering Game 5, Tatum has accrued a whopping 91 turnovers over 22 postseason contests. As a result, he’s just three giveaways short of tying LeBron’s 94 miscues during the 2018 playoffs. 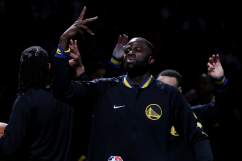 Loading more stories
wpDiscuz
0
0
Would love your thoughts, please comment.x
()
x
| Reply
LeBron James and Dwyane Wade were taken aback by the way in which the Boston Celtics performed during Game 4 of the NBA Finals.