After beating the Boston Celtics in Game 4 of their best-of-7 series, Brooklyn Nets point guard Kyrie Irving signaled goodbye to the parquet floor at TD Garden in a manner that is not sitting well with one Celtics legend.

After the final buzzer capped off the Nets’ 141-126 win over the Celtics, Irving made his way to center court only to stomp on the face of the iconic Boston logo before making his way to the tunnel.

Then, the despicable act of a belligerent Celtics fan throwing a water bottle at Irving overshadowed — and deservingly, so — the gesture Kyrie made seconds before a water bottle was aimed at his head.

Kyrie Irving stomping on the face of the Celtics’ logo on his way out… pic.twitter.com/7Mf5zJEILi

Kevin Garnett On Kyrie Irving Stepping On Celtics Logo: ‘You Can’t Do That’

2008 Celtics champion, class of 2020 Basketball Hall of Fame inductee Kevin Garnett shared a few words on social media, Monday. As most Instagram users were reacting to the wild fan, who was subsequently arrested, Garnett expressed his frustration with the notion that everyone was, essentially, letting what Kyrie did slide.

“So nobody gonna say anything about Kyrie stomping “LUCKY”? We just gonna act like we didn’t see that? TF going on,” Garnett posted to his Instagram story. “You can’t do that. That’s not coo on no level .. All of us need to be better frfr. I’m just saying… Good morning to all n all have a great.. Happy Memorial Day.”

Big Baby Davis to Kyrie Irving: ‘You Step On Lucky, You Step On Everybody’

KG wasn’t the only one. His former teammate Glen ‘Big Baby’ Davis used the same platform to comment on the matter and sent the word out to Irving in a threatening manner.

“Real bull****. Like I said you step on lucky you step on everybody,” Davis wrote. Keep that s*** basketball before somebody get hurt in real life.” 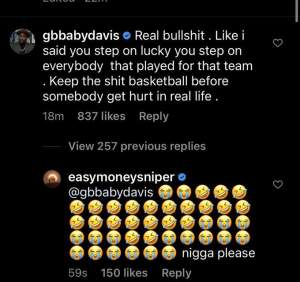 It didn’t take long for Irving’s teammate, Nets All-Star forward Kevin Durant to respond to Davis. Durant, who’s infamous for posting and sending emotionally charged messages via social media, responded to Davis in a message that started off with over three dozen crying-laughing emojis that was followed by, “N**** please.”

Garnett’s initial post — which was what seemed to have initiated the spat between Durant and Davis — could potentially motivate other former Celtics players to speak out. However, seeing what happened seconds later to Irving makes it that much harder to criticize Kyrie.

Sure, both actions are not ideal. However, the latter incident — the one that landed a spectator behind bars — is much more despicable.

Still, clearly, Kyrie released some sort of built-up angst. But, was it toward the fanbase or the Celtics organization when he stomped on the logo? Why else would he go out of his way to do that?

Embracing the villain role, maybe. Either way, there’s absolutely no love lost between the two sides.

Celtics fans will never forgive Irving for backing out of his promise to stay long-term, only to join forces with Durant in Brooklyn. However, it would be nice if Kyrie could just let us know when did everything go wrong.

Discover more from Heavy on Celtics↓

Unlock the latest Boston Celtics news, rumors and exclusives — direct to your inbox. ↓

Loading more stories
wpDiscuz
0
0
Would love your thoughts, please comment.x
()
x
| Reply
Kyrie Irving signaled goodbye to the parquet floor at TD Garden in a manner that is not sitting well with one Celtics Hall of Fame legend