The Brooklyn Nets have been wheeling and dealing the past several days and their training camp roster is stacked to the brim.

After trading away 20-year-old forward Sekuo Doumbouya, who the team acquired from the Detroit Pistons earlier in the offseason, fans likely thought this was the Nets cutting their roster down to the 15 needed to go into the season with.

On October 10, the Brooklyn nets announced they had signed two more players to the training camp roster, which makes the Doumbouya trade look even more puzzling.

Bryce Brown and Josh Gray are the two new signings, but fans shouldn’t have to worry about either of them stepping in to take the place of any of the key players, and it’s looking like they could be bound for the G-League.

These signings also come on the heels of releasing Edmond Sumner who they acquired in a trade with the Indiana Pacers, but they did get back a second round pick.

Brown, the former Auburn Tiger, went undrafted in the 2019 NBA Draft, but he was named to a pair of Second-team All-SEC teams and was also the SEC Tournament MVP in 2019.

He’s never gotten any true NBA action, but he has bounced around the league in the G-League. Most recently, he played with the Cleveland Cavaliers in the Summer League.

Similar to Brown, Josh Gray went undrafted in the 2016 NBA Draft, but he’s seen some NBA action, albeit for a total of just seven games. In the 2019-20 G-League season, Gray was the leading scorer overall while averaging 22.5 points per game. He was also a member of the Nets’ Summer League team in 2019.

At 28-years-old, his big break in the NBA seems unlikely to come, but maybe he could see some action with the Nets this season if Kyrie Irving is truly unable to play in over half of the team’s games.

For the time being, both Brown and Gray figure to become members of the Long Island Nets for the majority of the season.

It’s Good to Have Options 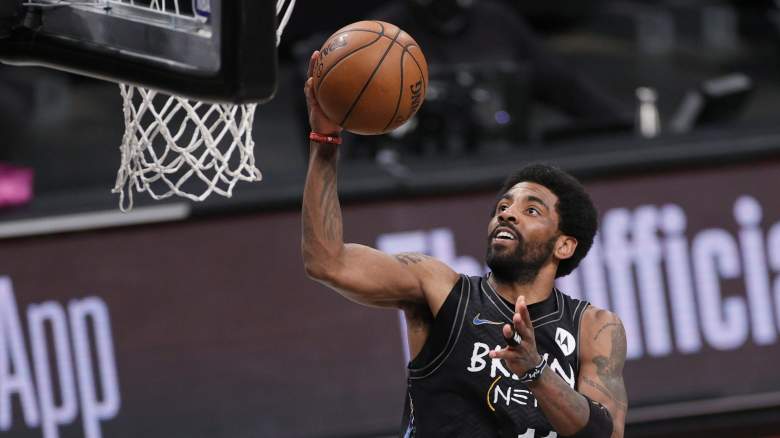 GettyKyrie Irving goes to the basket during the second half of Game Five against the Boston Celtics on June 1.

Having depth is never a bad thing, and with the Nets having a big question mark looming over the head of their star player, they want all of the safety nets they can possibly have in place.

Nets head coach Steve Nash sounds very prepared for the fact that Irving will not be playing in home games, and with Patty Mills as the only true option at point guard for the team outside of him, the team might have to get creative.

That could mean some of these G-League players could get called up to fill a void, or James Harden could simply slide over to the point guard spot and run the offense like he did with the Houston Rockets.

If there was a team out there who was prepared to be without the talents of Kyrie Irving for most of a season, it’s the Nets, so they should still have no problem securing a high seed in the playoffs if he’s missing all of the home games.

READ NEXT: Insider Has Update Amid Rumors of Kyrie Irving-Ben Simmons Trade