The Brooklyn Nets were without the services of Kyrie Irving in their preseason loss against the Philadelphia 76ers, and that opens up a whole new can of worms.

Before this game, the consensus seemed to be that Irving would be missing home games, but he’d be able to play in any other city that didn’t have any sort of vaccine mandate, like Philadelphia. However, the Nets traveled without him and they had to use a lineup without their star player.

At this point, it’s tough to tell exactly what the plan is for the team and Kyrie Irving, but a report from ESPN’s Adrian Wojnarowski during last night’s game suggests that there’s a certain group of players and executives who’ll be making the decision on what to do.

Steve Nash on if KD, Harden, Sean Marks (& Joe Tsai) would weigh in on whether Kyrie's role is diminished: "We have a pretty collaborative environment. We all weigh in & discuss it & make sure we're making a decision that suits the group. We're so far from that right now." #Nets

Naturally, reporters asked head coach Steve Nash about the report after the game and said they aren’t close to a decision either way at the moment.

“We have a pretty collaborative environment,” he said. “We all weigh in and discuss it and make sure we’re making a decision that suits the group. We’re so far from that right now.”

While he says they are far from making a decision, leaving Irving at home while the team travels to Philadelphia seems to indicate where they are falling in the grand scheme of things.

Before the game, Nash said he can’t really envision a way for that to happen.

“Maybe that presents itself somewhere down the line, but I wouldn’t imagine so,” he said according to the New York Daily News. “If he’s out there, he’s out there. This is all stuff that we have to figure out. As I keep saying, navigate. Because it’s kind of unprecedented. We’re just trying to take our time and not rush into any preconceived judgments of what we’re doing and figure it out as we go.” 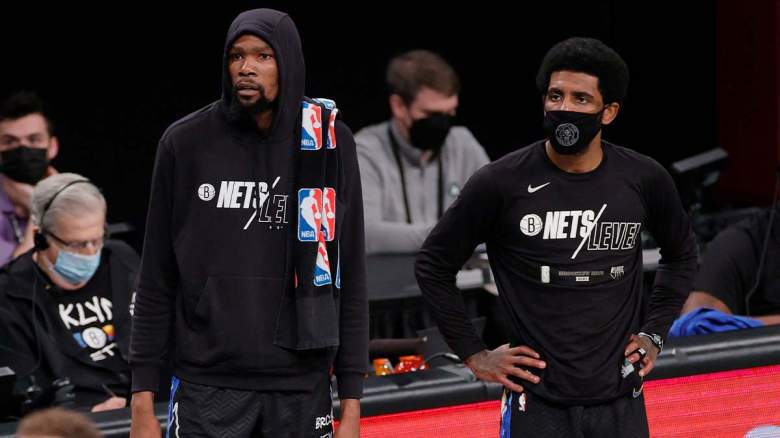 This ongoing saga has now put Irving’s future with the team in doubt. There was an expectation that he’d be able to suit up and face off against the Milwaukee Bucks in the season opener, but now it doesn’t seem so likely based on this latest development.

There’s still a week or so for the team to figure more things out and find a good situation for everybody involved. Obviously, this whole situation is unprecedented, and one has to simply wonder if any of this is even worth it.

Irving likely has practically no trade value because the same restrictions would be in place with another team, but at least he’d be able to play in more games than he would if he’s on a New York team. If last night is anything to go, it looks like the Nets are at least floating the idea of spending the whole season without him instead of him just being a part-time player.

For a team with championship aspirations, it’s a tough pill to swallow, but it seems like it could end up being the only option.

Loading more stories
wpDiscuz
0
0
Would love your thoughts, please comment.x
()
x
| Reply
The Brooklyn Nets reportedly have a committee to decide how to handle the Kyrie Irving saga.