Push has come to shove and Kyrie Irving has now forced the Brooklyn Nets to go on the road with his services.

In October 11’s preseason matchup against the Philadelphia 76ers, who may or may not be on the verge of getting Ben Simmons back, Irving stayed home and head coach Steve Nash had to craft a lineup without his star point guard.

Leaning on his experience running the offense with the Houston Rockets, Nash decided to start Harden at point guard and slide Joe Harris into the shooting guard position.

There still might be some tinkering to do before the season starts, but this could be the first glimpse into what the lineups will be looking like when everyone is available. 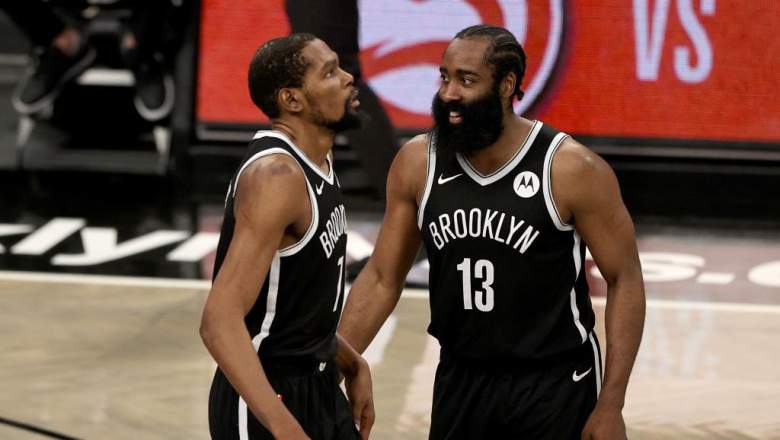 While Harden gets the start at point guard, there’s no question that the offensive load will be shared between him and Kevin Durant, and neither of them have any issues with doing that.

There was always going to be a question of who would step up to replace Kyrie on the road, but it looks like the answer was pretty simple. The starting lineup against the 76ers leaves a lot to be desired defensively, but it’s a lineup that could put points up against anybody.

LaMarcus Aldridge got the day off, so there’s a chance he could replace Griffin in the lineup when he’s ready to go. With the trade of DeAndre Jordan, the Nets are quite thin at the center position, so that might end up being a revolving door of players through the season.

What’s the Latest on Kyrie Irving?

Steve Nash on the decision to leave Kyrie Irving home in Brooklyn vs. bring him to Philly vs. 76ers: "We're just trying to take our time to figure out what everything means." #Nets

The team seems very aware of the possibility that Irving will not be able to play in home games, but it looks like the Nets might be getting used to him not being with the team at all.

There aren’t any restrictions that would have prevented Irving from traveling to the Philadelphia, but Nash explained his decision as “trying to take our time to figure out what everything means,” according to New York Daily News’ Kristian Winfield.

Steve Nash on the possibility of Kyrie Irving playing a reduced role in the games he is available so others can build continuity: "I couldn't imagine that," but also says you never know what the future holds. #Nets.

Nash pushed back when asked if there was a world he could envision where Irving plays a reduced role in games he can play in so he can build a rapport with his teammates.

“Maybe that presents itself somewhere down the line, but I wouldn’t imagine so,” he said according to the NYDN. “If he’s out there, he’s out there. This is all stuff that we have to figure out. As I keep saying, navigate. Because it’s kind of unprecedented. We’re just trying to take our time and not rush into any preconceived judgments of what we’re doing and figure it out as we go.”

With Harden and Durant in the lineup against the 76ers, it appears that it’s a conscious decision to leave Irving behind and this now puts his potential debut on the road against the Milwaukee Bucks in jeopardy.

There’s still some time for the team to possibly work something out, but the writing looks like it’s on the wall based on this decision.