Getty Linebacker Derick Hall #29 of the Auburn Tigers runs the ball down the sidelines after intercepting the ball against the Missouri Tigers on September 24, 2022.

Following the Buffalo Bills‘ 27-10 blowout loss to the Cincinnati Bengals in the AFC Divisional round, the team’s focus shifts to how they can improve for next season. Bills general manager Brandon Beane mentioned during his press conference on Tuesday, January 24 that they are well over the projected salary cap for next season, which means a huge part of their rebuild will be dependent on draft picks.

The 2023 NFL Draft is still three months out, but ESPN insider Mel Kiper Jr. predicts the Bills will select outside linebacker Derick Hall with their 27. overall pick. (Buffalo originally had the No. 28 pick but moved up after the Miami Dolphins were stripped of their first-round selection.)

Derick Hall, man. Ball player. Intelligent. Crazy twitch in striking range & VIOLENT hands. Not featured in these clips, but he sets the edge & takes on doubles as good as anyone not named Will Anderson in this class. pic.twitter.com/qqVNHePRBd

While the Bills seem to have much more pressing needs such as solidifying an offensive line that can better protect quarterback Josh Allen or a solid WR2 behind Stefon Diggs, Kiper predicts Buffalo will look to beef up their defense and get a “steal” in the first round with Hall.

“The Bills have one of the league’s best rosters, but they could lose a few defenders in free agency, including Jordan Poyer, Tremaine Edmunds, and Shaq Lawson,” Kiper wrote. “They need to restock in this draft. And even though Buffalo has used first- or second-round picks on Greg Rousseau, Boogie Basham, and AJ Epenesa in the past three drafts, its depth on the edge has to get better. That’s why I see Hall, who had 15.5 sacks over the past two seasons, as a stellar fit on Day 1. He could turn into a steal here.”

If the Bills pick the 6-foot-3, 263-pound edge rusher, it would break Auburn’s streak of not having a first-round selection since 2021. Kiper named Hall as the second-best outside linebacker available in the draft behind Alabama’s Will Anderson Jr. While the 21-year-old edge rusher only recorded 6.5 sacks last season, (he had nine sacks during the 2021 season) he also tallied 41 solo tackles, two forced fumbles, and one interception, which he ran for 19 yards.

Over four seasons, the team captain recorded a total of 146 tackles, 29.5 tackles for loss, 19.5 sacks, and forced five fumbles.

While Hall may be worthy of being a first-round pick, many people believe Kiper is way off in deciding Hall would be the best choice for the Bills. The Buffalo News reporter Jay Skurski reacted to Kiper’s prediction with a vomit-face emoji.

Skurski tweeted, “Mel Kiper Jr. has the #Bills selecting Auburn DE Derick Hall with the No. 27 overall pick in his first mock draft of the year for ESPN. My emoji response: 🤮 (The #Bills absolutely must draft offense this year — WR or OT. They have failed at giving Josh Allen enough help).”

Mel Kiper Jr. has the #Bills selecting Auburn DE Derick Hall with the No. 27 overall pick in his first mock draft of the year for ESPN. My emoji response: 🤮

(The #Bills absolutely must draft offense this year — WR or OT. They have failed at giving Josh Allen enough help).

One fan responded to Skurski, “Your emoji response is a lot of people’s emoji and real responses lol I want no parts of drafting another DE in rounds 1, 2, or 3,” while another suggested, “Nope. Will be oline or wr. Although I’d be ok with Bijan Robinson. He and cook would be scary.” Kiper predicts Robinson, a running back out Texas, will land with the Cowboys at No. 26. 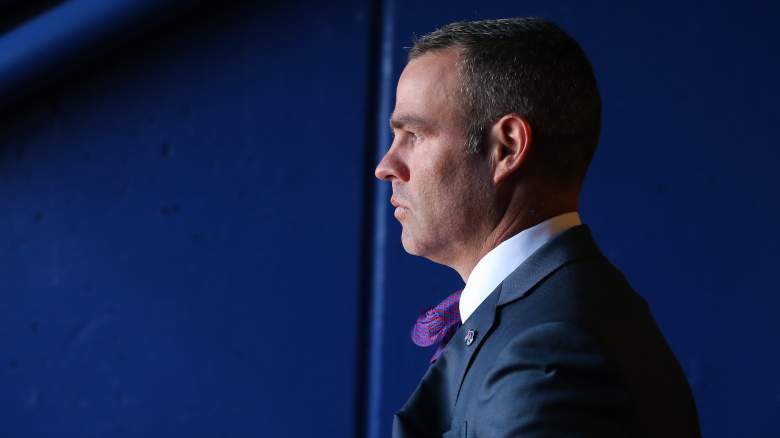 GettyGeneral Manager of the Buffalo Bills walks out to the field before the game against the Washington Football Team at Highmark Stadium on September 26, 2021.

Beane said during his presser on Tuesday that the Bills already had roughly $240 million on the books for next year, which makes landing a big fish in free agency, as they did plunking down $120 million for Von Miller last year, not an option.

“We’ve just got to, you know, we gotta hit on draft picks, we gotta find low-cost free agents that can find roles, whether it’s key backup, a solid starter, whatever it is,” Beane said. “And so, it’ll be on me and our scouting staff to make the right moves.”

While Beane will forever be lauded for drafting Allen in 2018, New York Upstate‘s Matt Parrino pointed out that it’s been a while since Beane has made a great pick, as Tre’Davious White, Matt Milano, and Dion Dawkins were selected before he was hired.

“Since 2019, Beane has drafted 31 players and only nine have become regular starters,” Parrino wrote. “There isn’t one Pro Bowler or All-Pro selection among that group. “Perhaps the biggest criticism of Beane in his tenure has been his sub-par track record on the offensive line in the draft. He selected Wyatt Teller and traded him away to Cleveland, where he blossomed into an All Pro.” Adding insult to injury, the Bills traded up to get Cody Ford in the second round in 2019, while wide receivers D.K. Metcalf and A.J. Brown were still on the board. Just before the start of the 2022 NFL season, the Bills traded Ford to Arizona for a fifth-rounder.

The Bills have a total of six picks in the 2023 NFL Draft. They have a selection in each of the opening rounds, two picks in the fifth round, and zero in Round 6 and Round 7.