Getty Aaron Rodgers #12 of the Green Bay Packers looks to pass during a game against the New York Jets at Lambeau Field on October 16, 2022 in Green Bay, Wisconsin.

Amidst a three-game losing streak, Packers quarterback Aaron Rodgers put his entire offense on notice as they prepare to face the Bills on Sunday Night Football. During an appearance on “The Pat McAfee Show” on Tuesday, October 28, the four-time MVP said the Packers are committing double the amount of mental errors or missed assignments than usual and he’s fed up.

“We’ve got to fix that,” Rodgers told McAfee. “And whatever that is, I think guys who are making too many mistakes shouldn’t be playing. Gotta start cutting some reps, and maybe guys who aren’t playing, give them a chance.”

The following day, Rodgers doubled down on his statement. “I don’t understand why people have a problem with things that are truthful,” Rodgers said, per ESPN‘s Rob Demovksy. “I’m calling things the way I see it. People don’t think I need to air that stuff out, that’s their opinion. But I’m doing what I think is in the best interest of our guys, and I’ve tried a lot of different things from a leadership standpoint this year, and I was just relating my personal feelings on the situation. I didn’t call anybody out by name. I think we all need to be on the details, and that includes me.”

Rodgers seems to be doing everything he can to rally the troops and make their upcoming matchup against the Bills at least competitive. Buffalo was deemed 10.5-point favorites to beat the Packers, marking the first time in Rodgers’ career that he’s been a double-digit underdog. Not only do the Packers have a 0-6 career record when playing on the road in Orchard Park, per USA Today, but under head coach Sean McDermott, the Bills have never lost their first game back from a bye week.

However, there is one stat that bodes well in Rodgers’ favor. The 38-year-old veteran has won each of his last 13 primetime matchups, per One Bills Live host Chris Brown. 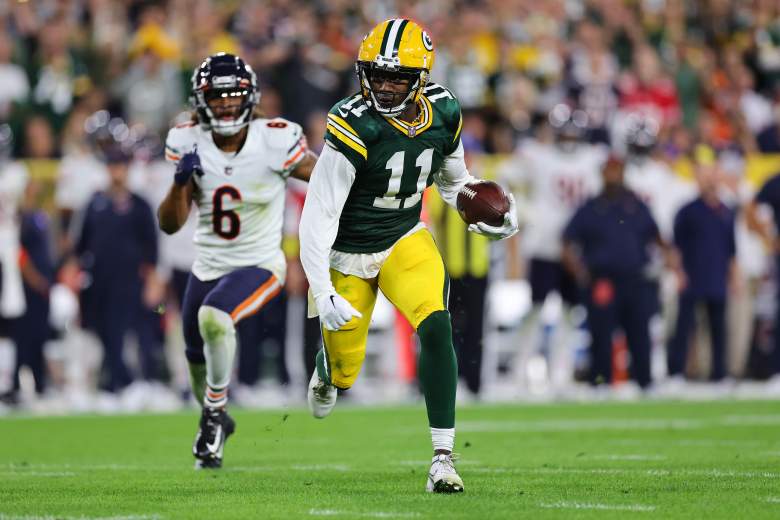 GettySammy Watkins #11 of the Green Bay Packers runs with the ball during the first quarter in the game against the Chicago Bears at Lambeau Field on September 18, 2022.

While former Packers star Greg Jennings criticized Rodgers, “You can’t sit down on a show and start talking about who should and shouldn’t be playing because of mental errors,” he said per Fox Sports‘ Carmen Vitali, Rodgers said that no one has approached him to discuss his cut-throat comments, and head coach Matt Fleur did not publicly condemn the Super Bowl champ.

Packers wide receiver Sammy Watkins, the Bills’ former first-round pick from the 2014 NFL Draft, also told reporters that he had no issues with Rodgers’ ultimatum.

“I’m with Aaron,” Watkins said. “If I’m not playing well… and busting plays then get me out of the game because that’s not helping the team. I think that’s a wake-up call to everybody. A wake-up call to myself. I try to limit myself having one M.A. (missed assignment) a game and that’s my goal. And the goal is to have none. But I feel like everybody’s on the hot seat right now, even myself. I’ve got to go out there and make plays as much as I can and do anything to get it done. We have to do it as a collective group. And I think this is the game to do it.”

Rodgers has clearly read the critical comments, as he slammed his own fans as “pigs in s***” while appearing on McAfee’s podcast, and he told reporters the next day that Green Bay will use that to their advantage.

“You can be a dangerous team when you feel like you have a lot to prove, and when you’re kind of counted out,” Rodgers said. “So I welcome us being counted out as much as possible.”

Bills quarterback Josh Allen made it clear that he’s not sleeping on Rodgers, and neither is Buffalo’s defense. “It’s Aaron Rodgers, man. I don’t care what their record is,” safety Jordan Poyer said, per the Bills’ official website. “I don’t care that they’re struggling, this, that or the other. Whatever, that’s still Aaron Rodgers. Any time he’s lining up back there at quarterback you better be on your stuff because that’s a Hall of Fame quarterback, arguably one of the best quarterbacks to ever play the game.”

While the Packers’ offense is missing several key starters, Bills linebacker Von Miller is keeping his eyes on Green Bay’s dynamic running back duo of Aaron Jones and CJ Dillon.

“He runs hard,” said Miller of Jones. “He can slip and slide from A gap to C gap. He has the speed to take it the distance… Dillon is running the ball amazing as well, too… If they run the ball on us and they’ve got A-Rod, too, it’s not going to look good for us. We’ve got to continue to play our game, continue to do what we do best, take it one play at a time and I feel like we’ll be all right if we can play our style of Bills football.”

Loading more stories
wpDiscuz
0
0
Would love your thoughts, please comment.x
()
x
| Reply
Packers quarterback Aaron Rodgers put the entire Green Bay offense in the hot seat for ahead of their primetime matchup against the Buffalo Bills.