The anticipation surrounding Buffalo Bills‘ divisional-round playoff game against the Cincinnati Bengals grows each day. Not only will viewers finally see superstar quarterbacks Josh Allen and Joe Burrow battle it out through four quarters, but they’re in win-or-go-home territory. The stakes couldn’t be higher.

While comparisons between Allen and Burrow are headlining debates across the league leading up to Sunday’s matchup at Highmark Stadium, former Bengals cornerback Adam “Pacman” Jones doesn’t believe there’s a need to compare the two at all. During an appearance on the “Smash & Dash” podcast hosted by former NFL running backs Chris Johnson and LenDale White, Jones trashed Allen’s talent.

“Did you look at the game last week?” Jones asked, referring to the Bills-Dolphins matchup. “I want you to go back and look at the m*********** again. All ya’ll ride Josh Allen’s tail right now. He’s probably got another two, three years — that s*** is going to slow down. Only reason we’re talking about Josh Allen right now is cuz of his feet, it’s definitely not his arm. He had at least six throws last week that was late.”

“The only reason we’re talking about Josh Allen right now is because of his feet. It’s definitely not his arm.”@REALPACMAN24 is NOT a fan of the Bills’ QB 💀 pic.twitter.com/WFoPRiAmdw

It’s no secret that the Bills’ 34-31 Wild Card win over the Dolphins wasn’t pretty. Allen completed 23-of-39 passes for 352 yards and three touchdowns but committed several costly turnovers, including two interceptions and a fumble which led to a Dolphins defensive touchdown.

Johnson and White interrupt to ask Jones if the former All-Pro’s opinion is based on just one game, which clearly isn’t a fair assessment following a 16-game regular season during which Allen threw for 4,238 yards and 35 touchdowns. While his 14 interceptions aren’t great, Burrow had similar stats (4,475 yards, 35 touchdowns) with 12 interceptions. Ultimately, the Bills finished the year with a 13-3 record, while the Bengals finished 12-4.

“I’m talking about the whole season,” Jones continued. “When he came out of college? What was his M.O.? What did they say he couldn’t do? He was inaccurate. How many quarterbacks are inaccurate that’s all of a sudden getting accurate? Not many.”

Allen’s expontentional growth since he was drafted in 2018 is well documented, so Jones, who had one of the most turbulent careers in the NFL due to his continuous off-the-field issues, might as well take a seat next to NFL analyst Nick Wright in the ridiculously biased hater club.

Johnson, who earned the Offensive Player of the Year Award in 2009, is still cheering for Allen to finish the season hoisting the Lombardi Trophy. “I’m not saying he’s overall a better quarterback, I’m just saying I’d like him this year. I’d like him to win it this year.” 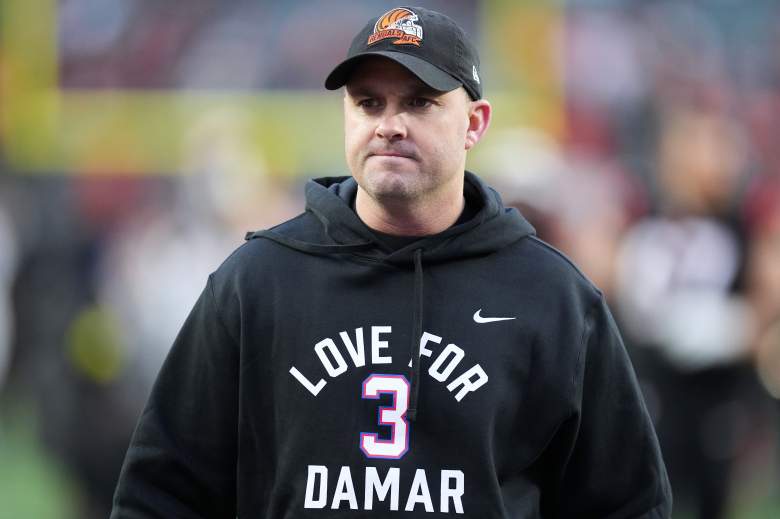 GettyHead coach Zac Taylor of the Cincinnati Bengals walks off the field after defeating the Ravens on January 08, 2023.

While the Bengals head coach Zac Taylor slammed the NFL for changing the playoff rules after their Week 17 matchup against Buffalo was declared a no-contest, his ire never poured into hate toward the Bills.

Taylor and the entire Bengals organization handled the unprecedented traumatic event regarding safety Damar Hamlin with grace at Paycor Stadium on January 2, and heading into their playoff game against the Bills, he continues to treat their AFC rival with respect.

When asked how he prepares to shut Allen down, “It’s just really difficult,” Taylor said during a press conference on Wednesday. “Not only is he a tremendous passer – accuracy, arm strength, decision making – and then you add on the fact he’s a giant human being and he will run and try to run you over. That’s tough.

“That’s one of the reasons he’s had a lot of success because he’s a dual threat that way. They design the run game around him a lot of times, and he’s not afraid to carry and run for it. It’s a unique challenge.”

Starting for you in a HUGE playoff game, who would you rather have?

Despite the Bills’ less-than-stellar performance over the Dolphins last week, oddsmakers considered Buffalo as favorites to defeat the Bengals. However, Cincinnati’s offensive line has taken some hits heading into the divisional round. Not only is starting right rackle La’el Collins on IR, but Jonah Hill (dislocated knee cap) and Alex Cappa (ankle) suffered injuries while playing against the Ravens last week.

On Thursday, January 18, Caesar Sportsbooks‘ Max Meyer tweeted, “The biggest divide on any Divisional Round spread at @CaesarsSports is Bengals at Bills. This line opened Bills -3.5, now it’s up to -5.5.”