Getty Jon Feliciano #76 of the Buffalo Bills on the bench during the fourth quarter of a preseason game against the Minnesota Vikings at New Era Field on August 29, 2019.

Numerous former players and members of the coaching staff followed the Buffalo Bills‘ former offensive coordinator Brian Daboll to the Meadowlands after he was named head coach of the New York Giants, including offensive line coach Bobby Johnson and veteran lineman Jon Feliciano.

While the Bills have had several physical altercations break out at training camp at St. John Fisher University, there was a fight that broke out at Giants’ practice on Monday, August 8 involving both Johnson and Feliciano that got incredibly out of hand.

The Athletic’s Dan Duggan tweeted, “We had a MAJOR fight. Started with Jon Feliciano and Tae Crowder. Cam Brown dragged Feliciano out of the scrum and OL coach Bobby Johnson pushed Brown. Then Feliciano punched Brown in the head. Never seen a coach do that to a player.”

Duggan added, “The whole sequence started with Saquon [Barkley] lowering his shoulder into Aaron Robinson with a bit more physicality than practice had been operating at. Next play, Crowder tackled Antonio Williams. Then Feliciano went right after Crowder on the next play and we were off!”

Jon Feliciano and Tae Crowder fight!!!!!! Feliciano ended up swinging on Crowder after the fact too pic.twitter.com/xS54LBeNw8

Leonard’s description of the fight matched Duggan’s, noting how “Johnson pushed LB Cam Brown. Then Feliciano sucker-punched Brown.” The Giants’ beat writer tweeted that it was, “Mayhem. What a disaster. Can’t believe Feliciano. All started by Barkley, who had McKinney in his face for starting it.”

ESPN’s Jordan Ranaan wrote on Twitter that Giants practice was “getting crazy,” on Monday, as “Johnson got involved,” and “Feliciano and Brown threw straight haymakers at each other (with helmets on). 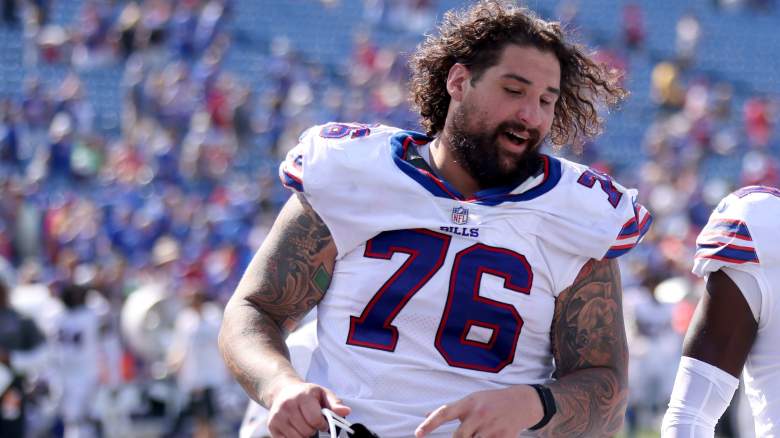 GettyJon Feliciano #76 of the Buffalo Bills, react after defeating the Green Bay Packers 19-0 at Highmark Stadium on August 28, 2021.

Feliciano, who was benched during the team’s final game of the postseason, said during an appearance on Ariel Helwani’s podcast in May how the Bills “deserved” to lose their overtime playoff game against the Kansas City Chiefs:

“To be honest, I was like… hmm. I was definitely sad for my teammates. I did what I can on the sideline. I was coaching up people. Every time Gabe (Davis) scored I was on his hip, like ‘I’m there for you.’ But I can’t lie, there’s a part of me that wasn’t like, ‘Oh, y’all got what you deserved.’ Honestly, when you look back at that game, they weren’t playing football.

“Everyone was just going through the motions. There wasn’t anyone challenging in the face of KC’s defense or there was no attitude out there and I feel like that’s what I bring. And I feel like potentially if there was that it wouldn’t have been such a close game. But who knows, I might be wrong.”

Mafia Sports Report response to Jon Feliciano comments he made on Ariel Helwani podcast….Mongo you are officially out of the Bills Mafia Family…. ✌️✌️ @wufosports @BuffaloFAMbase @Apex006 #BillsMafia #Bills pic.twitter.com/uEv6wSOb6x

While Buffalo’s players and staff didn’t publicly comment on Feliciano’s critical words about the team, both Bills and Giants fans took issue. Talkin Giants‘ podcast host tweeted, “This is even more weird considering Jon Feliciano’s OC & OL Coach are now his coaches with the Giants.”

PFF’s E.J. Daniel tweeted, “Lets get one thing straight, Jon Feliciano was not the difference in that game 😂… Cmon man.”

And if guys don’t play that way, they won’t play for him. pic.twitter.com/X1ciFBclG4

While not everyone enjoyed Felician’s critical comments, Johnson thinks the veteran center having a bone to pick will only help his game. “I think the world of Jon as a player,” the Giants coach said on May 20.

“I think he has a lot of ability. I think he has a chip on his shoulder, he feels like he has something to prove every day. Not only as a player, but as a man. I know that’s how he plays —He plays with an edge you want your room to have.

“I joke when I write the depth chart every day on the board — I write the names or nicknames. His is ‘dirtbag.’ That’s how he plays. Not in an illegal fashion, but he plays the game on the edge.

“If they don’t play that way, they will not play,” Johnson added, while also noting that he starts players that stay ready. “Availability is another trait. If you’re available, you get reps, you get better. If you’re not, you don’t.”