Getty Case Keenum #18 of the Buffalo Bills looks on during the second quarter of a preseason game against the Denver Broncos at Highmark Stadium on August 20, 2022.

During the Buffalo Bills (6-2) loss to the New York Jets on Sunday, November 6, quarterback Josh Allen appeared to injure his throwing arm after getting strip-sacked by Jets defensive lineman Bryce Huff late in the fourth quarter. While Allen brushed off the seriousness of the injury after the game, NFL Network‘s Ian Rapoport’s latest report on Monday jumpstarted further speculation.

Rapoport tweeted, “Josh Allen is likely to be limited this week because of an elbow injury suffered late in Sunday’s loss but as of now it’s considered a situation to monitor rather than an ailment that would keep him out of the game, sources say. He’s still undergoing tests to be sure.”

NFL Insider Chris Mortensen added, “Allen is being evaluated for an elbow injury to his ulnar collateral ligament and related nerves, per source,” which is similar to the same injury Allen suffered during his rookie year at Wyoming. The injury kept him out for four games, per 13 WHAM‘s Dan Fetes.

Pro Football Talk tweeted, “If for some reason Josh Allen (elbow) can’t go next week for Buffalo, it will be the Bizarro Minneapolis Miracle game, with Case Keenum and Stefon Diggs facing the Vikings.” While this is the exact type of scenario the Bills were preparing for when they traded for Keenum during the offseason, the situation coming to fruition would obviously be a devastating blow for Buffalo.

Head coach Sean McDermott’s addressed Allen’s injury first thing during his press conference on Monday. “We’re going through it,” McDermott said, in terms of evaluating Allen’s elbow injury. “We all know Josh and how competitive he is,” McDermott continued, per One Bills Live host Chris Brown. “He loves competing out there with his teammates. I would never count him out. The medical piece we’re still evaluating. I’ll know more tomorrow and update you Wednesday.”

Cover 1 podcast host tweeted, “I would rather sit Josh Allen 4-6 Weeks and try to momentum our way into a Wildcard/Super Bowl than risk the long-term health of his throwing arm. But I trust the #Bills medical staff to make the right decision on their $250 million investment.”

McDermott Addressed the Possibility of Keenum Starting Vs. Vikings 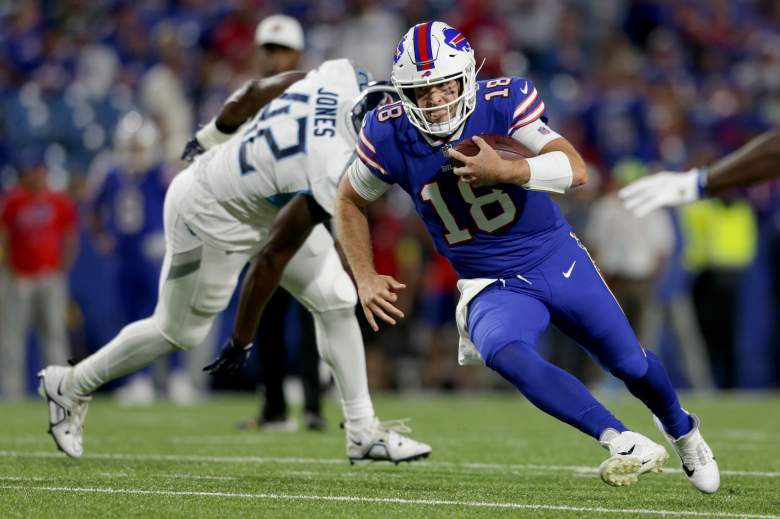 GettyCase Keenum #18 of the Buffalo Bills runs the ball against the Tennessee Titans during the fourth quarter of the game at Highmark Stadium on September 19, 2022 in Orchard Park,

For the Bills, it’s currently more important to have Allen 100% healthy for the back half of the season than to force a start against the Minnesota Vikings (7-1) in Week 10. While the Vikings are No. 1 in the NFC North, the Bills are favored to win on Sunday by 9.5 points. However, those odds may shift if Allen is officially ruled out.

McDermott said of the 34-year-old backup quarterback on Monday, “He’s a veteran player who has taken a lot of snaps and won games. Just his presence on our team carries an influence in a unique way. He knows his role. It’s been good to have him with us here.”

Signing with the Bills marked Keenum’s seventh team since he first joined the NFL, and while he didn’t exactly impress during his first preseason game against the Colts, he was playing “with an offense comprised entirely of backups,” The Athletic‘s Tim Graham pointed out. “Keenum completed 11 of his 18 passes for 86 yards and no touchdowns with two interceptions. The first wasn’t his fault; the second was a groaner near the goal line. He also was strip-sacked.” Keenum went on to perform much better in the preseason game against the Denver Broncos, completing 16 of 18 passes for 192 yards and a touchdown in the first half.

In addition to playing for the Browns and Texans, Keenum played with the then-St. Louis Rams (2015) and Los Angeles Rams (2016), before signing with the Vikings in 2017. A year later, Keenum signed a two-year $36 million contract with the Broncos, before he was traded to the Washington Commanders in March 2019. In Washington, Keenum started eight games, where he tallied a total of 1,707 passing yards, 11 touchdowns, and five interceptions. The Commanders went 1-7 in those games.

Last season, Keenum started two games for the Browns, during which he passed for a total of 462 yards, three touchdowns, and one interception. The Browns won both games. During the 2022 NFL season, Keenum has briefly appeared in two games after the Bills already had a sizable lead on their opponents, in Week 2 against the Tennessee Titans and Week 5 against the Pittsburgh Steelers.

"When you care as much as Josh does, the players play for him. They love playing for him."

After losing to the Jets, Allen seemed way less concerned about his arm, and more worried about his performance, placing the Bills’ loss squarely on his shoulders. “It’s tough to win in this league when you’re playing a good team and your quarterback plays like sh**,” Allen said. “I made some bad decisions tonight that cost our team. A lot to learn from, a lot to grow from,” Allen added. “That’s not the standard we hold ourselves to. Not the ball that we play.”

The Athletic‘s Joe Buscaglia tweeted, “Allen remained sitting in his locker stall for some time after his press conference, with a long stare. Clearly not happy with how today went against the Jets.”

McDermott also addressed Allen’s deflated demeanor while speaking to the media on Monday. “When you care as much as Josh does the players play for him,” Mcdermott added. “He’s a leader in so many ways. He just spends himself in a worthy cause in how intentional he is when he plays. He plays it the right way and he’s very driven. It’s great to have him on our side.”