Getty Jevon Holland #8 of the Miami Dolphins tackles Devin Singletary #26 of the Buffalo Bills during the AFC Wild Card playoff game at Highmark Stadium on January 15, 2023.

The Buffalo Bills eked out a 34-31 win against Miami Dolphins during their Wild Card round matchup on Sunday, January 15, and despite being considered 13-point favorites, quarterback Josh Allen and his team found themselves in a tight game that came down to the wire.

However, many fans and analysts believe this AFC East rivalry matchup could’ve gone into overtime and accused head official Brad Allen and his referee crew of blowing the final call of the game, which went in the Bills’ favor.

In order to clinch the win with 1:16 left in the fourth quarter, Buffalo just needed to get another first down. While the refs declared Bills running back Devin Singletary‘s third-down run good enough for a first down, the CBS broadcast announcers were immediately dubious. Jim Nantz said, “It looks like he’s about a foot short,” while Tony Romo suggested the Bills “take a time out, take it all the way down, and discuss this now, are we inches, a foot, or a yard?”

Did Devin Singletary get the first down? 🤔

Twitter was immediately filled with comments from people slamming the refs for not making the right call. The Athletic‘s Tim Kawakami tweeted, “How did they rule it was a first down? That is unbelievable from the initial spot. Just ridiculous. Maybe they measure it out and somehow it’s a first, but can’t just signal it…. At least has to be a measurement.”

One person tweeted, “Tough to argue forward progress when the player never reached the first down line 😭,” while SB Nation‘s Seahawks blog wrote, “Singletary looked short of the first down but no one wanted to see Miami get the ball back and commit Delay of Game in the hurry-up.”

Is this a Buffalo Bills first down? 🤔 pic.twitter.com/AUkllyWGSL

FanSided‘s Alicia de Artolo Castillo surmised, “That was not a first down but at this point just ending the game is the merciful thing,” as the matchup lasted nearly an hour longer than the typical run time in regulation.

Because the call was initially ruled a first down, any review would’ve had to have shown clear evidence for it to be overturned. USA Today‘s Robert Zeglinski reported, “Singletary seemed to be well short from various angles, but was strangely awarded the controversial first down anyway… The yellow broadcast line isn’t official, but there’s a lot of evident space” between where the Bills running back was and “where the first down mark is….. The call stood because there wasn’t enough evidence to push it the other way.”

What Would’ve Happened If the Bills’ First-Down Play was Overturned?

We can only speculate what would’ve happened if the refs deemed Singletary short of the first down, but it would’ve been a gargantuan task for the Dolphins to pull out the win or even tie the score.

If the call was overturned, the Bills could’ve gone for it on fourth down, and it’s easy to see Allen’s 6-foot-5 frame reaching the short distance needed for the first down. Buffalo could’ve looked to kicker Tyler Bass to attempt a 50-plus-yard field goal, or punted the ball, which would’ve given Miami the ball back with very little time left on the clock. While it’s improbable that the Dolphins could’ve pulled off a miraculous comeback, “it feels like Miami was robbed of the first step in that game-tying path on Singlatery’s ‘first down,'” Zeglinski wrote.

“Its the playoffs… We found a way, that’s all that matters"@JoshAllenQB praised his defense for their role in the @BuffaloBills tight win over the Dolphins.

However, the call stood and Allen praised Singletary for his aggressive, game-clinching run. “I didn’t put us in very good situations today,” Allen admitted, as he threw two interceptions and fumbled the ball twice. “Credit to our O-line. Finishing on that last drive. ‘Motor’ putting his head down, going and getting it… When they know you’re running, you gotta be able to do it. We were able to do it. I’m proud of our team. We have a lot of stuff to clean up and work on, but looking forward to next week.”

The Bills Will Host the Bengals in the Next Round 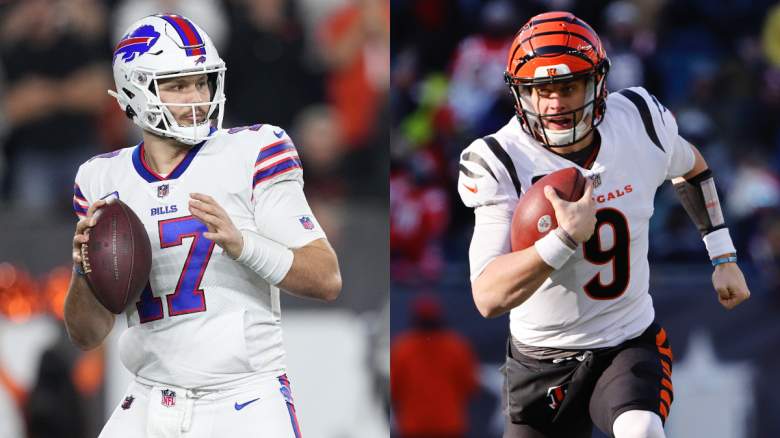 GettyThe Bills no longer control their playoff destiny after the NFL declared their Week 17 matchup vs. Bengals will not be resumed.

While it wasn’t the prettiest win against a team forced to start a rookie third-string quarterback, the Bills did enough to advance to the next round of the playoffs.

With the Bengals’ 24-17 victory over the Baltimore Ravens on Sunday night, Buffalo will now get to play the game that never was after their Week 17 matchup in Cincinnati was declared a no-contest.

The Bills are 4 point FAVORITES against the Bengals https://t.co/7sc8sEb2s3

Bengals quarterback Joe Burrow and Co. will travel to Highmark Stadium to take on the Bills in the divisional round. Kickoff is scheduled for Sunday, January 22 at 3 p.m. ET.

Loading more stories
wpDiscuz
1
0
Would love your thoughts, please comment.x
()
x
| Reply
The validity of the Bills' game-winning first down against the Miami Dolphins in the Wild Card round sparks a major debate on Twitter.