Getty Gabe Davis #13 of the Buffalo Bills celebrates with fans after catching a touchdown pass against the Miami Dolphins in the AFC Wild Card playoff game at Highmark Stadium on January 15, 2023.

The Buffalo Bills‘ 34-31 Wild Card round victory over the Miami Dolphins was not pretty, but it was enough to punch their ticket to the next round of the playoffs. While there were a lot of turnovers and dropped balls on offense, Bills wide receiver Gabe Davis stepping up against Miami was a huge factor in Buffalo eking out the win.

Davis hasn’t had the breakout season analysts expected following last year’s history-making playoff performance, but he bounced back big time against the Dolphins last weekend, recording six receptions for 113 yards and a touchdown. After the game, the term “Playoff Gabe” popped up in postgame discussions across the league, and the nickname has stuck.

Things we love to see.

The 23-year-old is looking to keep the momentum going, and following the conclusion of the team’s walkthrough practice on Wednesday, January 18, Davis stayed after to catch balls from the JUGGS machine, per 13WHAM‘s Dan Fetes.

As for what inspired the extra workout, Davis told reporters that one of his biggest motivators is coming from a teammate currently unable to participate on the field, superstar edge rusher Von Miller, who was the Super Bowl MVP when he won the championship with the Denver Broncos back in 2016, and hoisted the Lombardi Trophy once again with the Los Angeles Rams last year.

“Von put the Super Bowl trophy over in the locker room and he said, ‘You said you’d do anything for it.’ So, it kinda reminded me of what we need to do to get there. I’mma try my best to show the guys they can trust me and do the extra work.”

Pretty powerful statement from a player who knows what it takes to win it all #BillsMafia @WKBW pic.twitter.com/q8SeCRze8C

Following his big game against the Dolphins, Davis revealed another big key motivator in his life, his mother. “You know mom also wrote me a letter reminding me too of where I came from and how blessed I am to be in the position I’m in. Remember why I’m doing what I’m doing.”

While Davis and his teammates have powered through a ton of adversity this year, and have found huge inspiration in Damar Hamlin’s remarkable recovery following his traumatic medical emergency at Paycor Stadium on January 2, the former fourth-round pick from the 2020 NFL Draft says you can never have enough motivating factors.

“There’s a lot of risk here,” Davis said. “Again, we’re trying to win the whole thing so just taking it one day at a time and putting in all the work I can for the guys.” 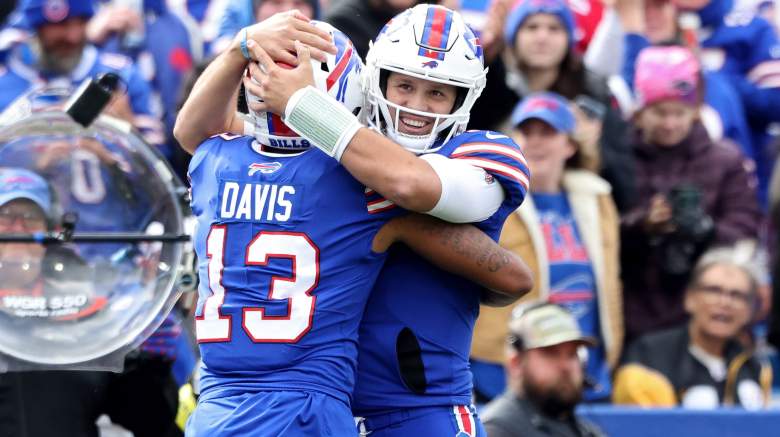 GettyJosh Allen #17 of the Buffalo Bills celebrates with Gabe Davis #13 after a touchdown against the Pittsburgh Steelers during the second quarter at Highmark Stadium on October 09, 2022.

Davis getting his mojo back in the postseason is a huge boost for the Bills, as having a solid No. 2 receiver option behind Stefon Diggs makes Buffalo’s offense all the more dangerous. According to Bills quarterback Josh Allen, however, Davis has been quietly producing all season.

During his press conference on Wednesday, Allen was asked about “Playoff Gabe” and the 26-year-old wasn’t buying into the hype.

“I know everybody wants to make it a deal, but he’s the same guy,” Allen said. “He really is. I know this year hasn’t been the best year that he could’ve had, but if you still look at the numbers and stats he put up this year, it’s been a very solid year.”

During the 2022 regular season, Davis finished with 48 receptions for 836 yards and seven touchdowns. He had six receptions in just one other game, against the Minnesota Vikings in Week 10. His biggest performance on the year was against the Pittsburgh Steelers back in Week 5, where he caught three receptions for 171 yards and two scores, during which his 98-yard touchdown marked a new record in franchise history.

“I freakin’ love the guy to death. He’s one of the most-liked guys in the locker room,” Allen continued. “He works extremely hard… not just in season but off-season. He really cares about his team, his teammates. He doesn’t care who gets the recognition. Speaks a lot about who he is.”

The Bills are Considered Favorites to Defeat the Bengals

As fate would have it, Buffalo’s next matchup is the game that never was, but now it’s a win-or-go-home tilt against the Joe Burrow and the Cincinnati Bengals.

Much like the Bills, Cincinnati struggled way harder than expected to defeat the Baltimore Ravens 24-17, a team led by backup quarterback Tyler Huntley.