Getty Gabriel Davis #13 high-fives Josh Allen #17 of the Buffalo Bills during the second half against the New England Patriots at Gillette Stadium on December 28, 2020 in Foxborough, Massachusetts.

The Buffalo Bills quarterback Josh Allen is not just having wild success on the field, he was absolutely dominant in the team’s season opener, going 26-of-32 for 297 yards with three passing touchdowns, along with rushing for 56 yards on 10 carries and a rushing touchdown — but he’s crushing it off the field, as well.

After releasing his own brand of cereal, “Josh’s Jaqs,” through his partnership with PLB Sports & Entertainment last month, Allen is rounding out the breakfast game with his own coffee label, “JA’s 17 Blend.”

The superstar quarterback posted the new commercial for the coffee’s official release on Instagram on Wednesday, September 14. The ad is incredibly camp and almost feels like a Saturday Night Live spoof, but the funniest part of the commercial happens in the last few seconds, when Bills wide receiver Gabriel Davis makes a surprise cameo.

“It’s @gabedavis at the end for me 😂,” one fan wrote in the comments, while another person added, “😂😂 cute commercial. A bit corny but that’s what keeps the guys humble.”

Overall, fans found the coffee commercial hilarious and incredibly endearing, especially since proceeds from sales will benefit Oishei Children’s Hospital. The single-serve pods can be purchased at Wegmans or ordered online. “Best part of waking up… JA 17 in your cup ☕️🔥🔥,” one Bills fan account commented, while another person wrote, “Can confirm it is the best damn coffee in the whole wide world.”

While two-time Pro Bowler Stefon Diggs is Allen’s No. 1 wide receiver, Davis has firmly cemented himself as his No. 2. Following Davis’ breakout performance in the playoffs last season, the expectations this year for the 23-year-old receiver are incredibly high.

NFL Network’s Adam Schein named Davis as one of his “guaranteed risers” for the 2022 NFL Season.

“No Cole Beasley? No Emmanuel Sanders? No problem. It is Gabriel Davis’ time to play Robin to Stefon Diggs’ Batman,” Schein wrote. “And shoot, sometimes the Boy Wonder will take the leading role. Remember the last time we saw these Bills in action? Davis posted a playoff-record four touchdown catches, finishing with eight total grabs for 201 yards in a narrow loss to the Chiefs. This guy’s the truth, with 18 touchdowns in 37 career games (including the playoffs). He’s a big-bodied deep threat with stellar hands. No wonder his quarterback loves him.”

The Gabriel Davis breakout season is off to a GREAT start for fantasy football managers:pic.twitter.com/JGRax8zXAy

Allen and Davis appeared to pick up right where they left while playing against the Los Angeles Rams in Week 1. The UCF alum played in 57 of 58 of the team’s offensive snaps, caught Allen’s first touchdown pass of the game, and finished the night with four receptions for 88 yards.

During an appearance on The Rich Eisen Show last month, Davis said he felt incredibly confident heading into the this season because he has Allen as a teammate.

“Josh is a competitor. He wants to win,” Davis told Eisen. “He comes into the huddle and calls that play, you’re ready to go. Everybody in that huddle and on the sideline has trust in him to lead this team to a victory. So, every time he calls a play, and as soon as we break it’s like, ‘Alright we’re gonna make something happen.’ 17 is a guy you can trust to make that happen.” 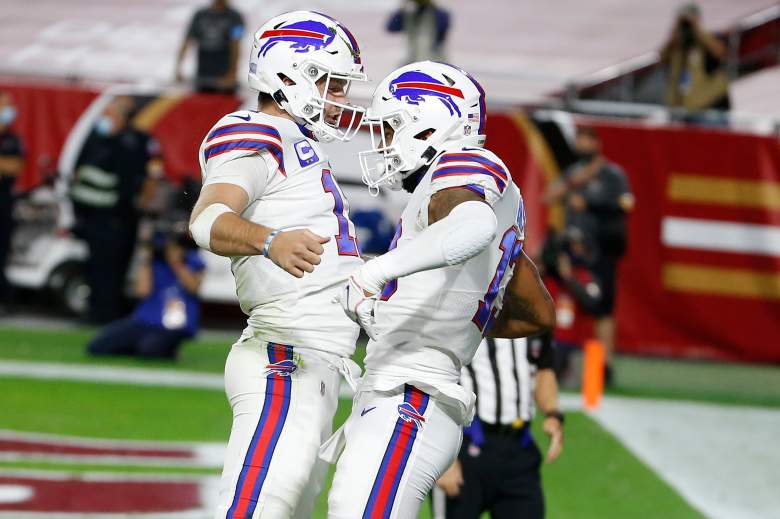 GettyQuarterback Josh Allen #17 of the Buffalo Bills celebrates a touchdown with wide receiver Gabriel Davis #13 during the fourth quarter of a game against the San Francisco 49ers at State Farm Stadium on December 07, 2020 in Glendale, Arizona.

While defeating the reigning Super Bowl champions on Thursday Night Football likely gave the Bills a huge confidence boost, they face another tough opponent in yet another primetime game in Week 2.

On Monday Night Football on September 19, the Bills will face one of their biggest AFC rivals, the Tennesee Titans, who finished No. 1 in the division last season.

While the Bills enter the matchup as 9.5-point favorites, Allen is not sleeping on the Titans. During an appearance on Kyle Brandt’s Basement, Allen said that he’s expecting the Titans to be “ticked off” as the team heads to Orchard Park for Monday Night Football, as they were defeated by the New York Giants in a stunning 21-20 upset in Week 1.

“Monday night – we know what it is. Another primetime game,” Allen said. “We’re playing against a really solid opponent that we’ve played the last four years. They’re going to be ticked off about how last week went. They’re a much better team than I think they played on Sunday. They’re going to come out and try to prove themselves right and so we gotta be ready for whatever punches they throw. We gotta have a good week at practice and put our best foot forward.”

Over the past four games Buffalo has played Tennessee, they’re tied 2-2, but in their most recent tilt last season, the Titans entered the game as 6-point underdogs and defeated Buffalo 34-31.